Quotes Lines listed 50 famous movie quotes from some popular movies. Movie is a great source of entertainment, knowledge and experience. Not only we watch movie for fun but also some moment or dialogue of movie were most inspirational, which we will see in bellow list. Check what movie lines comes from your favorite movie. Enjoy these movie quotes and share with your friends at your social communication profile. 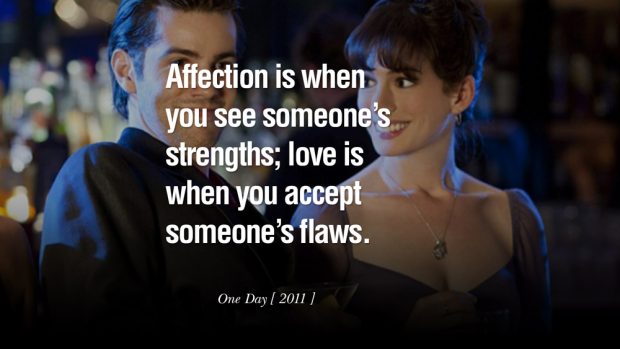 Affection is when you see someone’s strengths; love is when accept someone’s flaws. – One Day (2011)

I can’t believe I gave my panties to a geek. – SAMANTHA (Molly Ringwald) in Sixteen Candles (1984)

My name is Maximus Decimus Meridius, Commander of the armies of the North, General of the Felix legions, loyal servant to the true Emperor, Marcus Aurelius. Father to a murdered son, husband to a murdered wife. And I will have my vengeance, in this life or the next. – MAXIMUS (Russell Crowe) in Gladiator (2000)

Someone has to die in order that the rest of us should value life more. It’s contrast. – VIRGINIA WOOLF (Nicole Kidman) in The Hours (2002)

Joey, do you like movies about gladiators? – CAPTAIN OVEUR (Peter Graves) in Airplane! (1980) 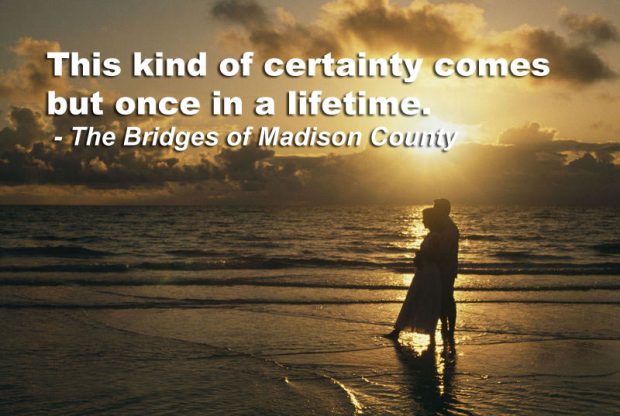 This kind of certainty comes but once in a lifetime. – The bridges of Madison County

Empire had the better ending. I mean, Luke gets his hand cut off, finds out Vader’s his father, Han gets frozen and taken away by Boba Fett. It ends on such a down note. I mean, that’s what life is, a series of down endings. All Jedi had was a bunch of Muppets. – DANTE (Brian O’Halloran) in Clerks (1994)

My daughter is in pain…Give my daughter the shot! – AURORA GREENWAY (Shirley MacLaine) in Terms of Endearment (1983)

I wanted to see exotic Vietnam, the jewel of Southeast Asia. I, uh, I wanted to meet interesting and stimulating people of an ancient culture, and kill them. – PRIVATE JOKER (Matthew Modine) in Full Metal Jacket (1987)

When the legend becomes fact, print the legend. – MAXWELL SCOTT (Carleton Young) in The Man Who Shot Liberty Valance (1962)

And I guess that was your accomplice in the wood chipper. – MARGE GUNDERSON (Frances McDormand) in Fargo (1996) 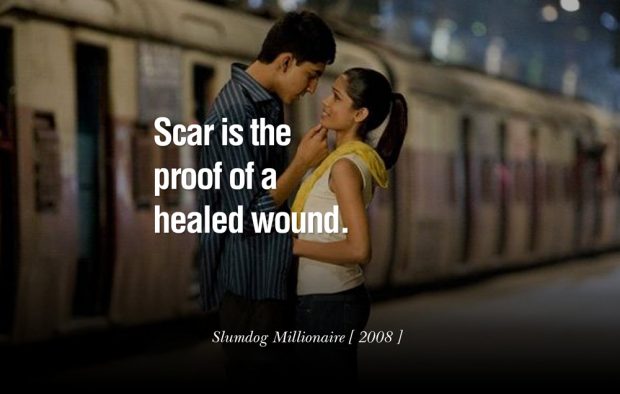 Scar is the proof of a healed wound. – Slumdog Millionaire (2008)

Mrs. Robinson, you’re trying to seduce me, aren’t you? – BEN BRADDOCK (Dustin Hoffman) in The Graduate (1967)

He won’t come after me…He won’t. I can’t explain it. He, he, he would consider that rude. – CLARICE STARLING (Jodie Foster) in The Silence of the Lambs (1991)

Excuse me while I whip this out. – BART (Cleavon Little) in Blazing Saddles (1974)

No, I’m all man. I even fought in WWII. Of course, I was wearing women’s undergarments under my uniform. – ED WOOD (Johnny Depp) in Ed Wood (1994)

Because when you’re a call girl, you control it, that’s why. Because someone wants you…and for an hour…I’m the best actress in the world. – BREE DANIEL (Jane Fonda) in Klute (1971)

Take your stinkin’ paws off me, you damn dirty ape. – TAYLOR (Charlton Heston) in Planet of the Apes (1968) 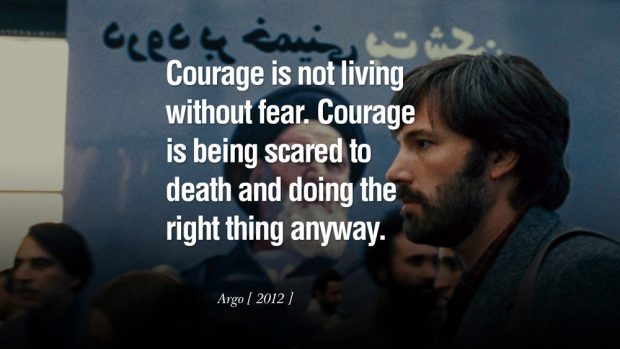 Courage is not living without fear. Courage is being scared to death and doing the right thing anyway.  – Argo (2012)

I coulda had class. I coulda been a contender. I coulda been somebody, instead of a bum, which is what I am, let’s face it. – TERRY MALLOY (Marlon Brando) in On the Waterfront (1954)

We all go a little mad sometimes. – NORMAN BATES (Anthony Perkins) in Psycho (1960)

That’s what I love about these high school girls, man. I get older, they stay the same age. – WOODERSON (Matthew McConaughey) in Dazed and Confused (1993)

When it comes down to makin’ out, whenever possible, put on side 1 of Led Zeppelin IV. – MIKE DAMONE (Robert Romanus) in Fast Times at Ridgemont High (1982)

Then I just hate you and I hate your ass face. – CORKY ST. CLAIR (Christopher Guest) in Waiting for Guffman (1996) 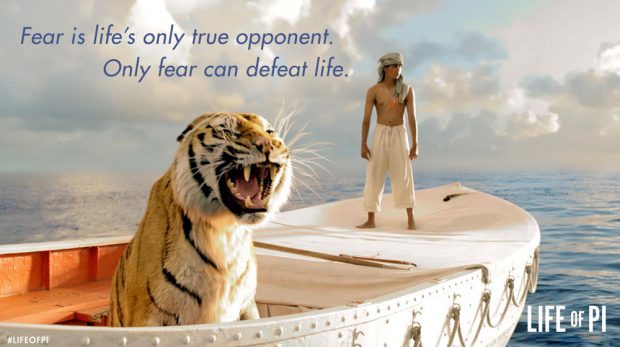 Fear is life’s only true opponent. Only fear can defeat life. – Life of Pi

You hear me talkin’, hillbilly boy? I ain’t through with you by a damn sight. I’m gonna get Medieval on your ass. – MARCELLUS WALLACE (Ving Rhames) in Pulp Fiction (1994)

I don’t want to talk to you no more, you empty-headed animal food trough wiper! I fart in your general direction. Your mother was a hamster and your father smelt of elderberries. – FRENCH SOLDIER (John Cleese) in Monty Python and the Holy Grail (1975)

…Your mother’s in here with us, Karras. Would you like to leave a message? I’ll see that she gets it. – REGAN MacNEIL/SATAN (Linda Blair) in The Exorcist (1973)

The greatest trick the Devil ever pulled was convincing the world he didn’t exist. – VERBAL KINT (Kevin Spacey) in The Usual Suspects (1995)

I do not, for one, think that the problem was that the band was down. The problem may have been that there was a Stonehenge monument on the stage that was in danger of being crushed by a dwarf. – DAVID ST. HUBBINS (Michael McKean) in This Is Spinal Tap (1984) 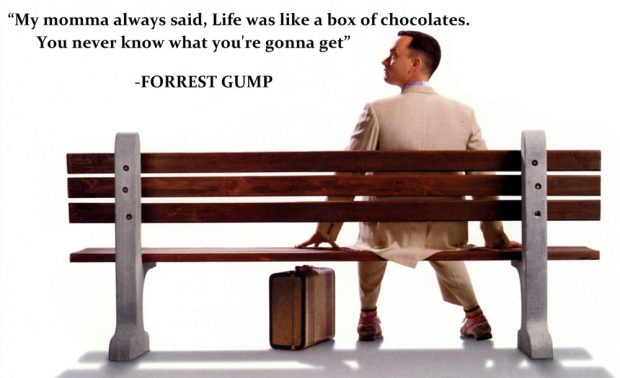 My momma always said, Life’s was like a box of chocolates. You never know what you’re gonna get. – Forrest Gump

So we finish 18 and he’s gonna stiff me. And I say, ‘Hey, Lama, hey, how about a little somethin’, you know, for the effort, you know.’ And he says, ‘Oh, uh, there won’t be any money, but when you die, on your deathbed, you will receive total consciousness.’ So I got that goin’ for me, which is nice. – CARL SPACKLER (Bill Murray) in Caddyshack (1980)

Look, you shoot up a guy’s head with his pants down, believe me, Texas is not the place you want to get caught. – LOUISE (Susan Sarandon) in Thelma & Louise (1991)

Relax, all right? Don’t try to strike everybody out. Strikeouts are boring; besides that, they’re fascist. Throw some ground balls. It’s more democratic. – CRASH DAVIS (Kevin Costner) in Bull Durham (1988)

You know, I have one simple request. And that is to have sharks with frickin’ laser beams attached to their heads! Now evidently, my cycloptic colleague informs me that that can’t be done. Uh, can you remind me what I pay you people for? Honestly, throw me a bone here. What do we have? – DR. EVIL (Mike Myers) in Austin Powers: International Man of Mystery (1997)

And one day, not long from now, my looks will go. They will discover I can’t act, and I will become some sad middle-aged woman who looks a bit like someone who was famous for a while. – ANNA SCOTT (Julia Roberts) in Notting Hill (1999)

Aristotle was not Belgian. The central message of Buddhism is not ‘every man for himself.’ And the London Underground is not a political movement. Those are all mistakes, Otto. I looked ’em up. – WANDA (Jamie Lee Curtis) in A Fish Called Wanda (1988)

Do you want me to strap her to the hood? What’s the difference? She’ll be fine. It’s not as if it’s gonna rain or something. – CLARK GRISWOLD (Chevy Chase) in National Lampoon’s Vacation (1983)

When you first came into breakfast, when I first saw you, I thought you were handsome. Then, of course, you spoke. So, now that your, uh, soft, little underbelly’s all exposed, tell me, why did you bring me here? – CAROL CONNELLY (Helen Hunt) in As Good As It Gets (1997)

See more : Best Quotable Lines From The Fast and the Furious Movie