Humanity Quotes: Humanity refers to the characteristic of being humane, which includes having or displaying compassion or kindness. It is essential that every human focus on becoming a good human being; humanity is the most important virtue of every human being. Humanity does not just include being a good human; it also involves supporting one another to make the world a better place in general. Every human must remember to help another human, which is the biggest trait of a good human.

“The sole meaning of life is to serve humanity.” – Leo Tolstoy

“If we have no peace, it is because we have forgotten that we belong to each other.” – Mother Teresa

“Be a good human being, a warm hearted, affectionate person. That is my fundamental belief.” – Dalai Lama 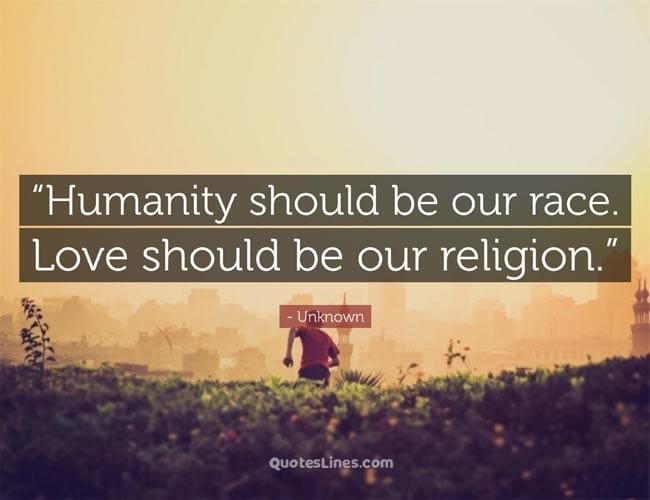 “Kindness is the language which the deaf can hear and the blind can see.” – Mark Twain

“Those who teach the most about humanity, aren’t always humans.” – Donald L. Hicks

“There is nothing on earth divine except humanity.” – Walter Savage Landor

“The best charity to serve humanity is just a person’s simplicity of living with his basic necessity.” – Anuj Somany

“In recognizing the humanity of our fellow beings, we pay ourselves the highest tribute.” – Thurgood Marshall

“A sweet new blossom of humanity, fresh fallen from God’s own home, to flower on earth.” – Gerald Massey

“If you want to go up in the world, veil ambition with the forms of humanity.” – Chinese Proverbs 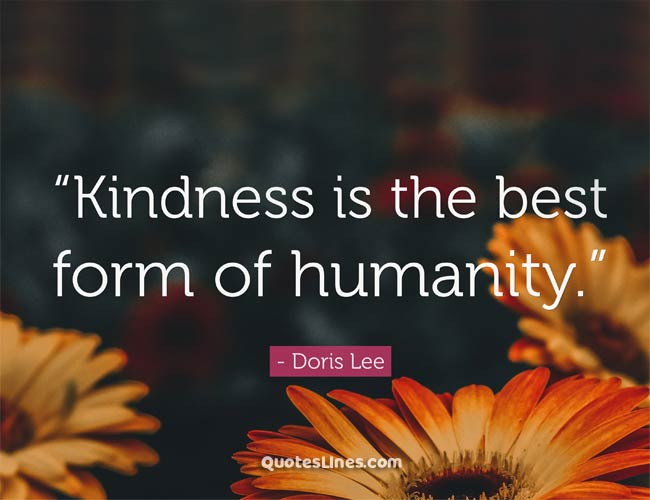 “You must not lose faith in humanity. Humanity is an ocean; if a few drops of the ocean are dirty, the ocean does not become dirty.” – Mahatma Gandhi

“People have become educated but have not become human.” – Abdul Sattar Edhi

“The best way to find yourself is to lose yourself in the service of others.” – Mahatma Gandhi

“Be ashamed to die until you have won some victory for humanity.” – Horace Mann

“When a person doesn’t have gratitude, something is missing in his or her humanity.” – Elie Wiesel

“Before you call yourself a Christian, Buddhist, Muslim, Hindu, or any other theology, learn to be human first.” – Shannon L. Alder

“My humanity is bound up in yours, for we can only be human together.” – Desmond Tutu

“Humanity has only scratched the surface of its real potential.” – Peace Pilgrim

“There is no higher religion than human service. To work for the common good is the greatest creed.” – Woodrow Wilson 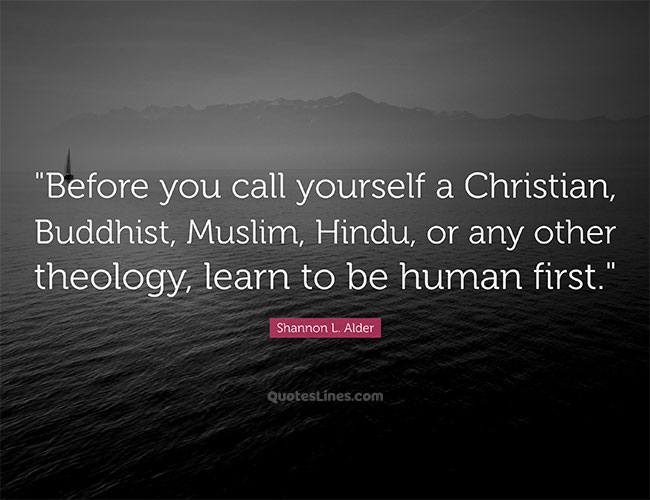 “Don’t look for big things, just do small things with great love….The smaller the thing, the greater must be our love.” – Mahatma Gandhi

“The next evolutionary step for humankind is to move from human to kind.” – Anonymous

“A human being: an ingenious assembly of portable plumbing.” – Christopher Morley

“Help the poor, at least this would give him hope that the world is not yet empty of good people.” – Gear

“We are all cells in the same body of humanity.” – Peace Pilgrim

“The human species is made up of seven billion subspecies each consisting of one specimen.” – Robert Braul

“Kindness is the best form of humanity.” – Doris Lee

“Sometimes it takes only one act of kindness and caring to change a person’s life.” – Jackie Chan

“Because that’s what kindness is. It’s not doing something for someone else because they can’t, but because you can.” – Andrew Iskander 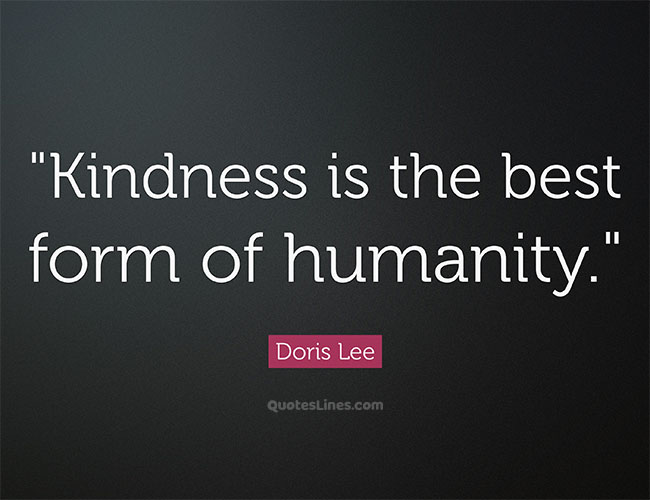 “To deny people their human rights is to challenge their very humanity.” – Nelson Mandela

“Love and compassion are necessities, not luxuries. Without them, humanity cannot survive.” – Dalai Lama

“Carry out a random act of kindness, with no expectation of reward, safe in the knowledge that one day someone might do the same for you.” – Princess Diana

“You cannot do kindness too soon, for you never know how soon it will be too late.” – Ralph Waldo Emerson

“An individual has not started living until he can rise above the narrow confines of his individualistic concerns to the broader concerns of all humanity.” – Martin Luther King, Jr.

“Remember there’s no such thing as a small act of kindness. Every act creates a ripple with no logical end.” – Scott Adams

“Be kind whenever possible. It is always possible.” – The 14th Dalai Lama

“What wisdom can you find that is greater than kindness?” – Jean-Jacques Rousseau 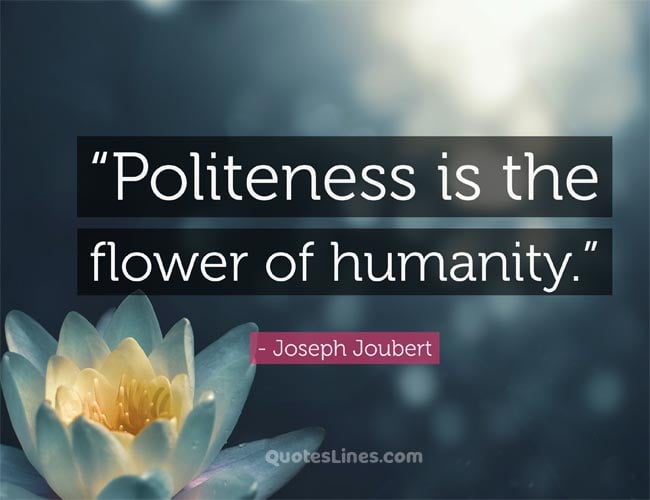 “What is tolerance? It is the consequence of humanity. We are all formed of frailty and error; let us pardon reciprocally each other’s folly – that is the first law of nature.” – Voltaire

“One way or another, we all have to find what best fosters the flowering of our humanity in this contemporary life, and dedicate ourselves to that.” – Joseph Campbell

“The purpose of human life is to serve, and to show compassion and the will to help others.” – Albert Schweitzer

“Benevolence is the characteristic element of humanity.” – Confucius

“No act of kindness, no matter how small, is ever wasted.” – Aesop

“A warm smile is the universal language of kindness.” – William Arthur Ward

“Politeness is the flower of humanity.” – Joseph Joubert 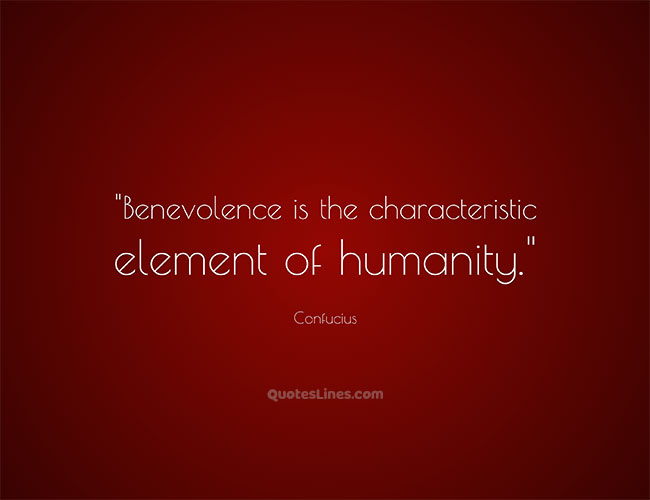 “We cannot despair of humanity, since we ourselves are human beings.” – Albert Einstein

“Not all of us can do great things. But we can do small things with great love.” – Mother Teresa

“By serving humanity, I automatically serve myself.” – Vironika Tugaleva

“Moral courage is the highest expression of humanity.” – Ralph Nader

“If you judge people, you have no time to love them.” – Mother Teresa

“Pray for your health first, then pray for humanity.” – Maxime Lagacé

“Here I am. I claim my humanity with no fear and no limits. Here I am.” – Oprah Winfrey

“Love and kindness are never wasted. They always make a difference. They bless the one who receives them, and they bless you, the giver.” – Barbara De Angelis

“Love cannot remain by itself — it has no meaning. Love has to be put into action, and that action is service.” – Mother Teresa 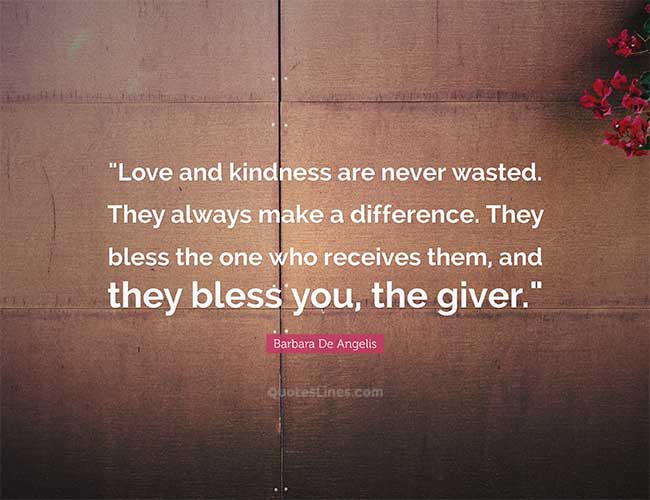 “Truth comes to us mediated by human love.” – A. N. Wilson

“Let us always meet each other with smile, for the smile is the beginning of love.” – Mother Teresa

“Deep love for humanity is a vaccine for depression.” – Debasish Mridha

“Love and compassion are necessities, not luxuries. Without them humanity cannot survive.” – Dalai Lama

“It’s a form of human love to accept our complicated, messy humanity and not run away from it.” – Martha Nussbaum

“I don’t think I could truly value human love until I developed divine love.” – Penn Badgley

“I love and care for everyone because I know the pain of being unloved and uncared.” – Luffina Lourduraj

“Be a one-sided lover to the whole humanity.” – Abhijit Naskar

“Above all nations is humanity.” – Goldwin Smith

“Every human being is a repeated question asked to the spirit of the Universe.” – Mihai Eminescu 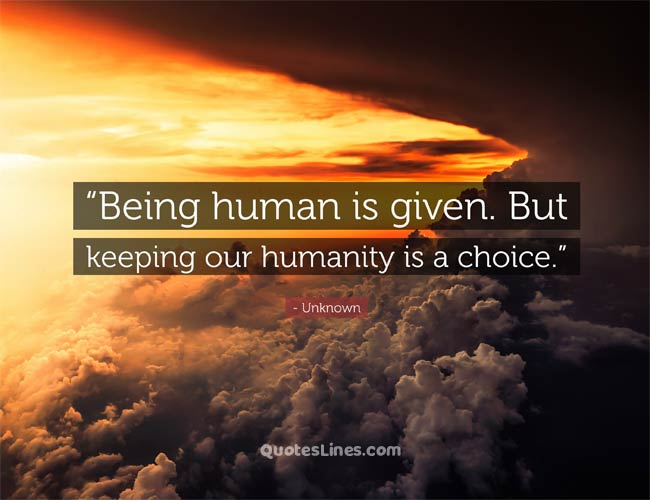 “Without ethical culture, there is no salvation for humanity.” – Albert Einstein

“If you can’t feed a hundred people, feed just one.” – Mother Teresa

“If I had my will I would live in a ship on the sea, and never come nearer to humanity than that!” – Eleonora Duse

“I am not a human being; I am a human becoming.” – Robert Phelps

“Humanity is lost because people have abandoned using their conscience as their compass.” – Suzy Kassem

“When I was young, I used to admire intelligent people; as I grow older, I admire kind people.” – Abraham Joshua Heschel

“Humanity is a parade of fools, and I am at the front of it, twirling a baton.” – Dean Koontz

“If we all do one random act of kindness daily, we just might set the world in the right direction.” – Martin Kornfeld 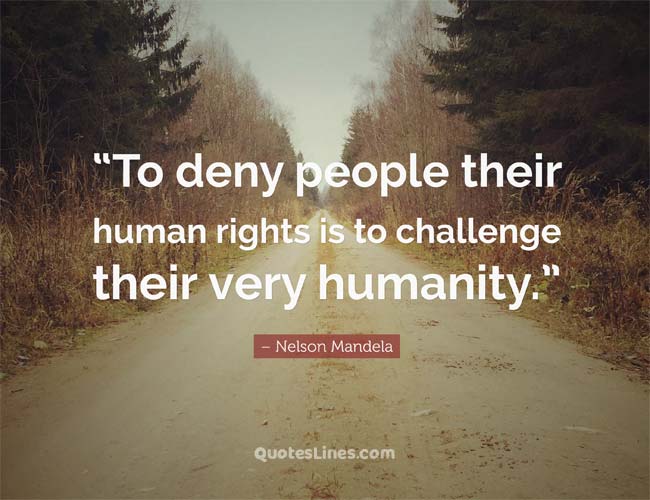 “Whatever you do will be insignificant, but it is very important that you do it.” – Mahatma Gandhi

“Character building begins in our infancy and continues until death.” – Eleanor Roosevelt

“Yes, it is love that will save our world and our civilization, love even for enemies.” – Martin Luther King JR.1

Read: Be Yourself Quotes That Will Inspire You

“The purpose of education is to make good human beings with skill and expertise… Enlightened human beings can be created by teachers.” – A. P. J. Abdul Kalam

“To be a good human being is to have a kind of openness to the world, the ability to trust uncertain things beyond your own control that can lead you to be shattered.” – Martha Nussbaum

“We change the world a little each day with our kindness.” – Tom Giaquinto

“Kindness trumps everything. Kind people are magnets for all of the good things in life.” – Tom Giaquinto

“Learning to appreciate the beauty that surrounds you is one of the keys to your happiness.” – Tom Giaquinto

“Within nature lies the cure for humanity.” – Jess Starwood

“It’s unrealistic to think that the future of humanity can be achieved only on the basis of prayer; what we need is to take action.” – Dalai Lama 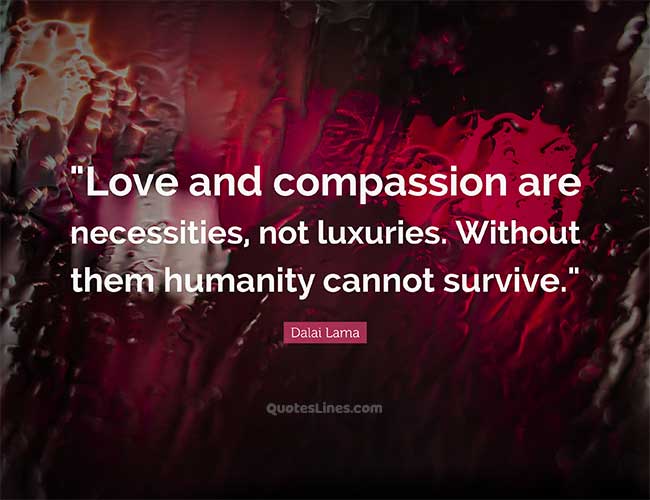 “Overcoming poverty is not a gesture of charity. It is an act of justice. It is the protection of a fundamental human right to dignity and a decent life.” – Nelson Mandela

“Over a distance of a thousand miles only humanity works, not power.” – Chinese Proverb

“Let our New Year’s resolution be this: we will be there for one another as fellow members of humanity, in the finest sense of the word.” – Goran Persson

“The world is full of nice people. If you can’t find one, be one!” – Nishan Panwar

“The main thing in life is not to be afraid of being human.” – Aaron Carter

“I am just a human being trying to make it in a world that is rapidly losing its understanding of being human.” – John Trudell

“There surely is in human nature an inherent propensity to extract all the good out of all the evil.” – Benjamin Haydon

“If you’re in the luckiest one percent of humanity, you owe it to the rest of humanity to think about the other 99 percent.” – Warren Buffett

“There is some kind of a sweet innocence in being human- in not having to be just happy or just sad- in the nature of being able to be both broken and whole, at the same time.” – C. JoyBell C.

Today’s world is filled with injustices, unfairness, and tragedies, it’s easy to lose trust in humanity. It’s also difficult to maintain your humanity. Although it is important to recognize the injustices and unfairness in the world and regard them as significant concerns that must be addressed, it is also important for us to recognize our own role in seeing alternations being made to make the world a better place, therefore, play a role in the humanity. If you are having difficulty communicating your thoughts about humanity to others in order to spread the significance of being a decent, good human being, we are here to assist you.