Brother Quotes: One of the greatest blessings in life is having a brother. Siblings have a special bond that cannot be described in words. A bond between a brother to a brother or a brother-sister is one of the best. Their affection and concern for one another are unfathomable, from fighting as kids to becoming a mentor. Every sibling has a special connection that no that they do not share with anyone else. It is impossible to deny their affection for each other. At times we can’t express our love for our brothers in words.

“Sometimes being a brother is even better than being a superhero.” – Marc Brown

“Your brother will never say he loves you. But he loves you more than anyone else in the world.” – Anonymous

“The highlight of my childhood was making my brother laugh so hard that food came out his nose.” – Garrison 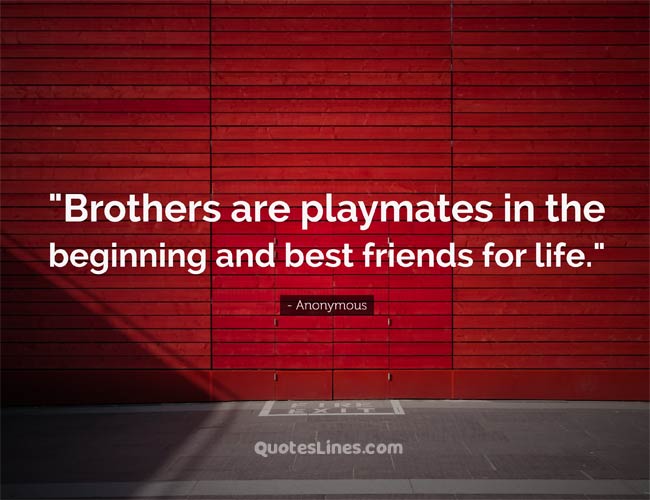 “A friend loveth at all times, and a brother is born for adversity.” – King Solomon

“Everyone knows that if you’ve got a brother, you’re going to fight.” – Liam Gallagher 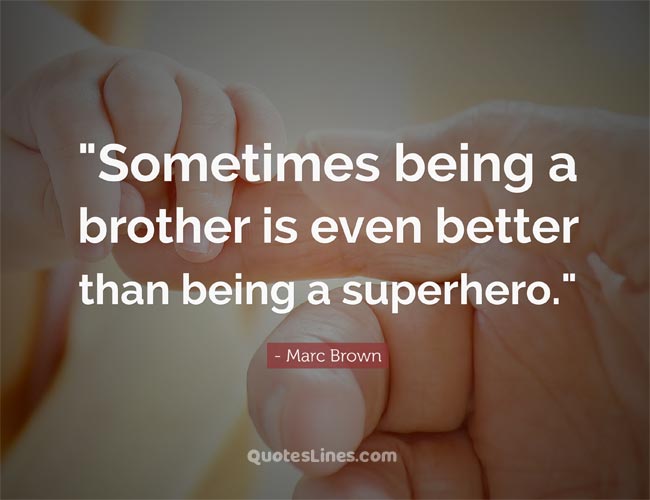 “Half the time when brothers wrestle, it’s just an excuse to hug each other.” – James Patterson

“Brothers are like streetlights along the road. They don’t make distance any shorter but they light up the path and make the walk worthwhile.” – Anonymous

“A brother is a friend given by Nature.” – Jean Baptiste Legouve

“It takes two men to make one brother.” – Israel Zangwill 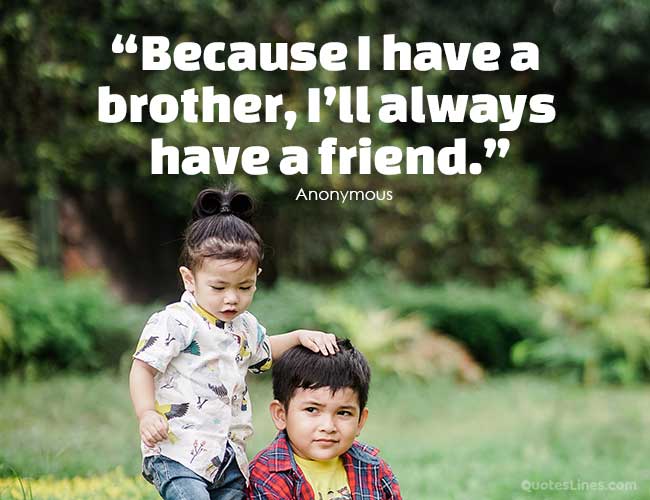 “The best way to get a puppy is to beg for a baby brother, and they will settle for a puppy every time.” – Winst

“Never make a companion equal to a brother.” – Hesiod

“The younger brother must help to pay for the pleasures of the elder.” – Jane Austen

“Oh, brothers! I don’t care for brothers. My elder brother won’t die, and my younger brothers seem never to do anything else.” – Oscar Wilde 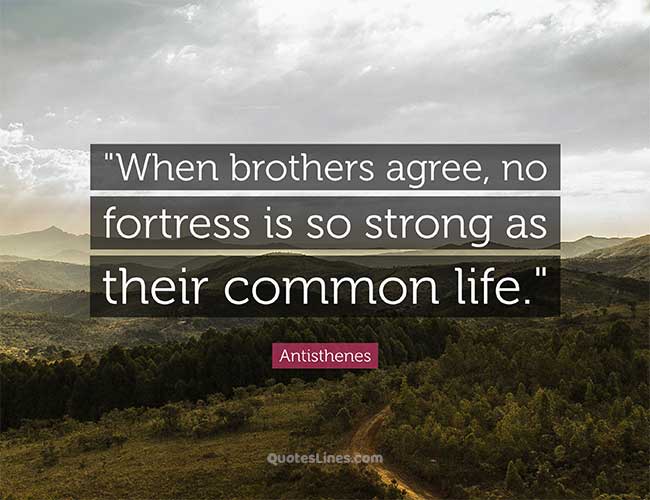 “As the younger brother, I think you always have crushes on your older brother’s girlfriends.” – Liam Hemsworth

“We came into the world like brother and brother; And now let’s go hand in hand, not one before another.” – William Shakespeare

“Nothing can stop me from loving my brother.” – Brandy Norwood 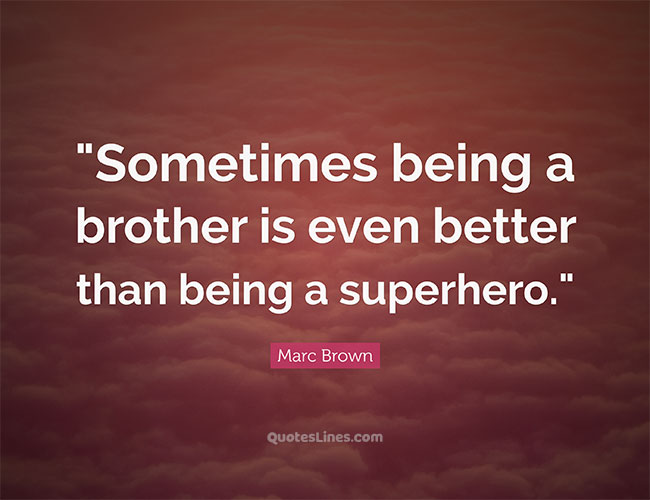 “If I could pick the best brother, I would pick you!” – Anonymous

“I grew up with six brothers. That’s how I learned to dance – waiting for the bathroom.” – Bob Hope

“My brother is one of my true heroes. Steady and sober where I am impulsive and emotional.” – Mark McKinnon

“Because brothers don’t let each other wander in the dark alone.” – Jolene Perry 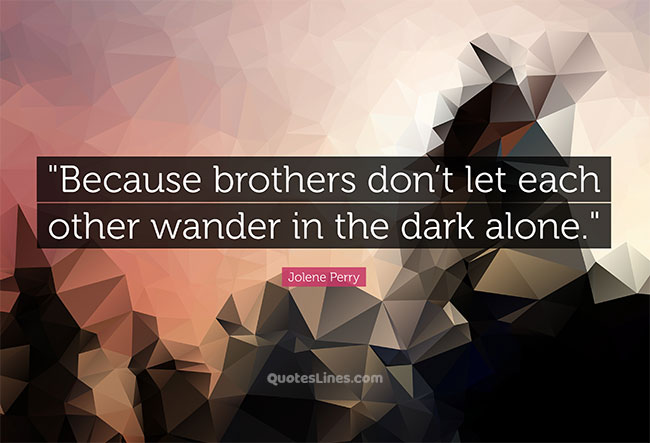 “I can’t work with my brother without laughing.” – Dick van Dyke

“A brother is a friend god gave you a friend is a brother your heart chose for you.” – Proverb

“I love my brother he is simply amazing and I just couldn’t imagine my life without him.” – Anonymous

“Help your brother’s boat across, and your own will reach the shore.” – Hindu Proverb 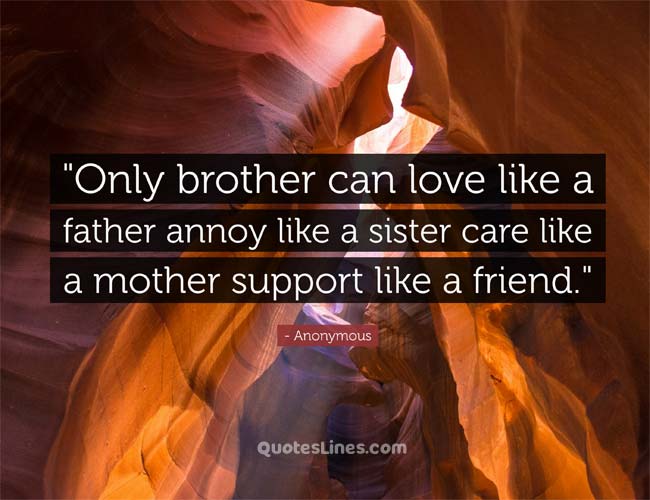 “The best thing about having four big brothers is you always have someone to do something for you.” – Chloe Moretz

“Because I have a brother, I’ll always have a friend.” – Anonymous 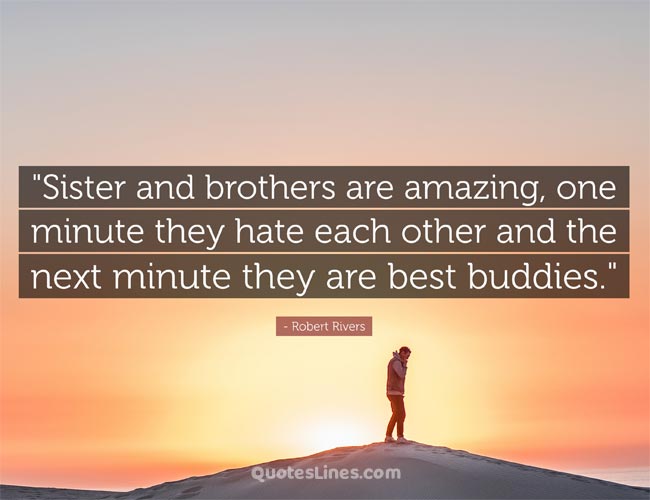 “Brothers don’t necessarily have to say anything to each other – they can sit in a room and be together and just be completely comfortable with each other.” – Leonardo DiCaprio

“I have given my word that only death will take me from you.” – Philippa Gregory

“The thing with brothers is, you’re supposed to take turns being the keeper. Sometimes you get to sit down and be the brother who is kept.” – Orson Scott

“With brothers you become friends. Some you hang out with more than others. You talk to one about the others a little more.” – Tito Jackson

“He is my most beloved friend and my bitterest rival, my confidant and my betrayer, my sustainer and my dependent, and scariest of all, my equal.” – Gregg Levoy

“When brothers agree, no fortress is so strong as their common life.” – Antisthenes

“As we grew up, my brothers acted like they didn’t care, but I always knew they looked out for me and were there!” – Catherine Pulsifer 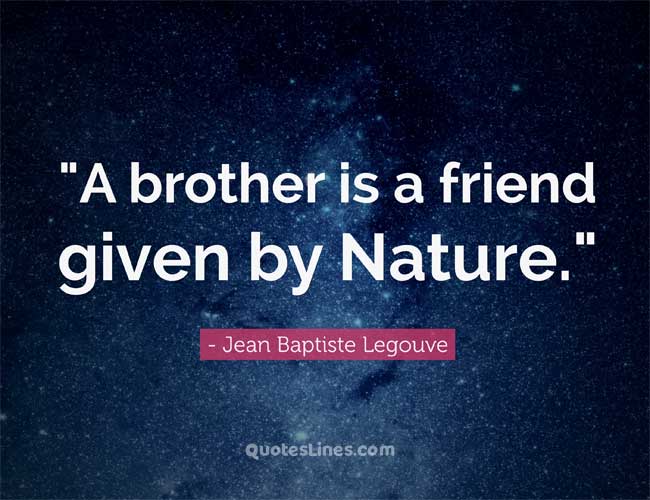 “After a girl is grown, her little brothers―now her protectors―seem like big brothers.” – Astrid Alauda

“Always and no matter what brothers and sisters are there for each other in times of troubles.” – Catherine Pulsifer

“There is no bond like the bond between brothers and sisters. Cherish each other!” – Particia Waldron

“A big sister acts as a friend, listener and advisor to her little brothers and sisters.” – Catherine Pulsifer 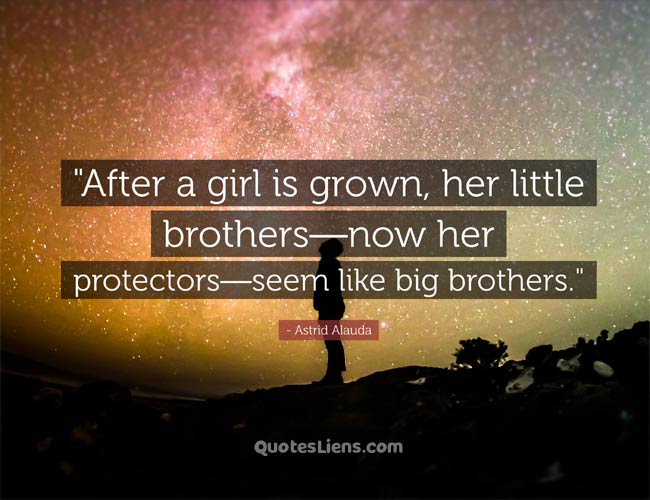 “Brothers are playmates in the beginning and best friends for life.” – Anonymous

“Brother and sister, together as friends, ready to face whatever life sends. Joy and laughter or tears and strife, holding hands tightly as we dance through life.” – Suzie Huitt

“Sister and brothers are amazing, one minute they hate each other and the next minute they are best buddies.” – Robert Rivers

“When mom and dad don’t understand, a sister always.” – Anonymous 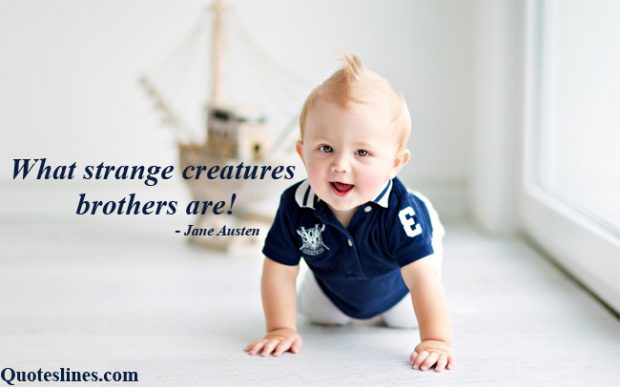 “I have a wonderful relationship with my brother and sister; this makes me feel that I know always where I belong.” – Jose Carreras

“Brothers & sisters are as close as hands and feet.” – Vietnamese Proverb

Read More: Brother and Sister Quotes That You Should Read

Brothers play a vital role in one’s life. They are the closest family members. It is always our brothers who fulfill our aspirations with their unwavering love, to which we can never say no. Siblings share their secrets and understand each other’s sentiments. Brothers teach so many things, including the real meaning of life. They slowly become our best friends. They make us know what is wrong and what is right.

Brothers will listen to your rantings and will give you good advice when you need it. Even if siblings fight for that last piece of pizza or argue about who is more adored by their parents, they know their love and affection will never go away in any way. Brothers will be your partner in crime but also will scold you when you do something wrong. You should never be afraid to express your feelings to your brother if you are close to him. It will make your bond stronger. If you’re at a loss for words, here, you’ll find a plethora of heartfelt love quotes for your brother. Sending your brother some expressive, caring, or thank you quotes would undoubtedly brighten him up.