Dead Quotes: Death is one sad little word that holds a huge experience, an unavoidable experience. It comes with loss, grief, mourns, and so may untold feelings. What one person needs to deal with death is a good meaningful closure that will bring peace in mind, end the grief and bring harmony with the apartness of the soul. In this case, we highly recommend reading and sending dead quotes or quotes about death because what can be more beautiful than express our feelings through words.

Here we gather a special compilation of quotes about death that have the power to calm you and your near ones’ mind, ease the storm going on the mourner’s mind and make us realize how beautiful is this life we are given. We are sure these quotes will help you overcome your sad feelings and assist you in dealing with sadness. Kindly scroll down to find more.

“I’m half alive but I feel mostly dead.” – Jewel

“The highest tribute to the dead is not grief but gratitude.” – Thornton Wilder

“Live your life that the fear of death can never enter your heart.” – Tecumseh

“Our dead are never dead to us, until we have forgotten them.” – George Eliot 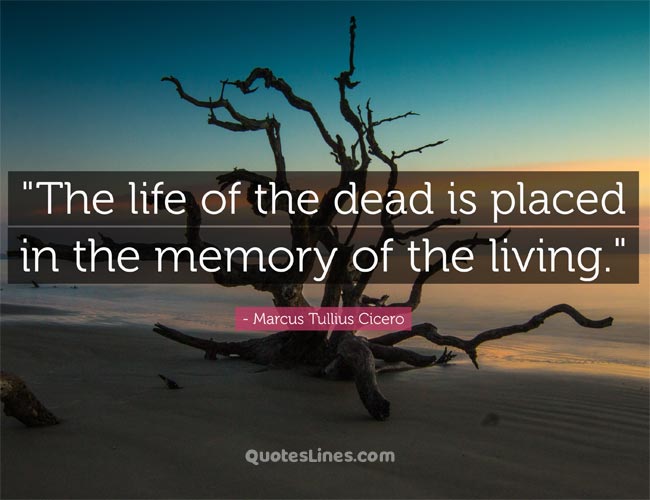 “Don’t send me flowers when I’m dead. If you like me, send them while I’m alive.” – Brian Clough

“The dead cannot cry out for justice. It is a duty of the living to do so for them.” – Lois McMaster Bujold

“I’m the one that’s got to die when it’s time for me to die, so let me live my life the way I want to.” – Jimi Hendrix

“The life of the dead is placed in the memory of the living.” – Marcus Tullius Cicero

“To the living we owe respect, but to the dead we owe only the truth.” – Voltaire 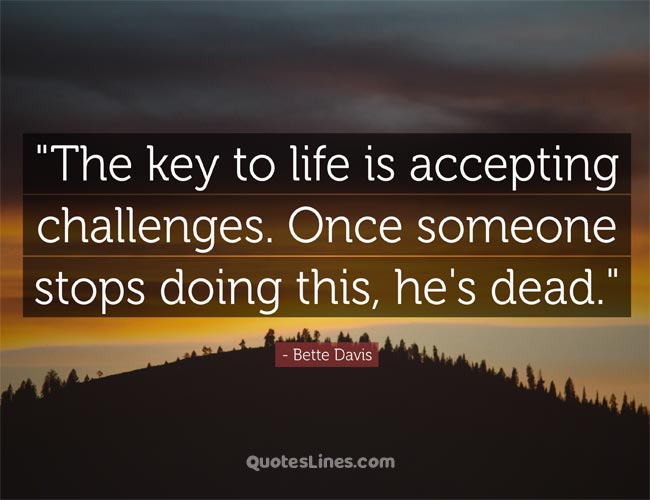 “The key to life is accepting challenges. Once someone stops doing this, he’s dead.” – Bette Davis

“The human animal is a beast that dies but the fact that he’s dying don’t give him pity for others, no sir.” – TENNESSEE WILLIAMS

“We all labour against our own cure, for death is the cure of all diseases.” – SIR THOMAS BROWNE

“Count yourselves dead to sin but alive to God Christ Jesus.” – Romans 6:11 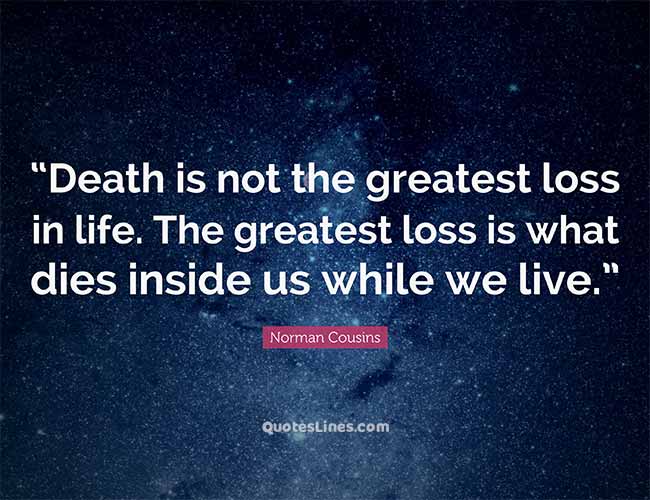 “To the well-organized mind, death is but the next great adventure.” – J.K. Rowling

“Dying is like getting audited by the IRS–something that only happens to other people… until it happens to you.” – JEROME P. CRABB

“You only live twice. Once when you are born and once when you look death in the face.” – IAN FLEMING 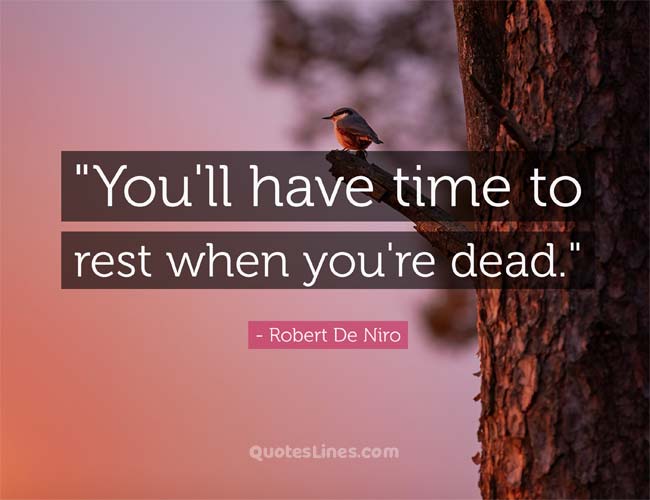 “Death is a natural part of life. Rejoice for those around you who transform into the Force.” – YODA

“I’m not afraid of death. It’s the stake one puts up in order to play the game of life.” – Jean Giraudoux

“I’m not afraid of death; I just don’t want to be there when it happens.” – Woody Allen 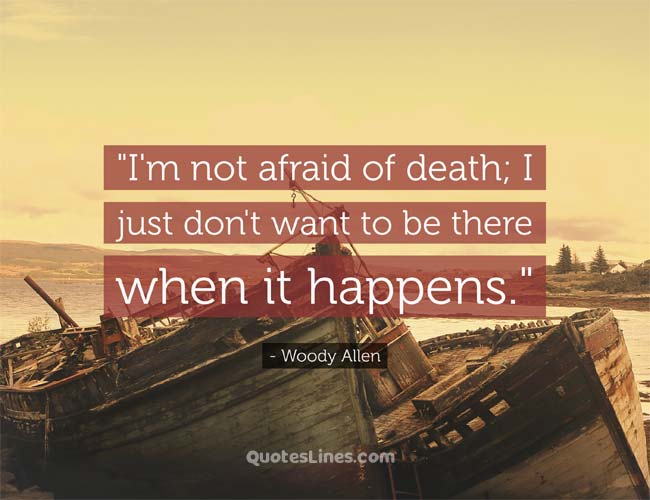 “To die will be an awfully big adventure.” – J.M. BARRIE

“I don’t mourn the dead. I mourn the living.” – Stephen Evans 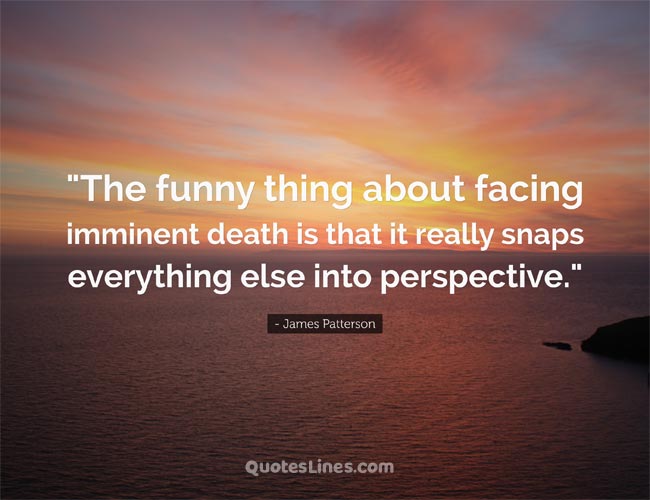 “A thing is not necessarily true because a man dies for it.” – Oscar Wilde

“Death does not wait to see if things are done or not done.” – Kularnava

“Better to flee from death than feel its grip.” – HOMER

“Only the dead have seen the end of war.” – Plato 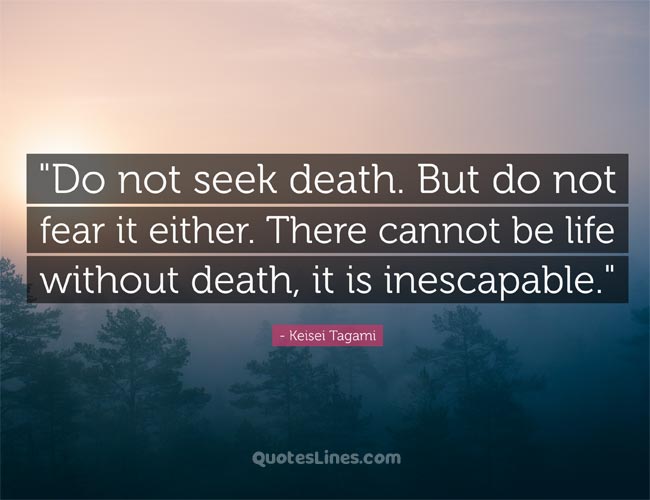 “Our life dreams the Utopia. Our death achieves the Ideal.” – VICTOR HUGO

“If I stop writing I am dead. And that’s the only way I’ll stop: dead.” – Charles Bukowski

“Death is a natural part of life. Rejoice for those around you who transform into the Force.” – YODA

“I’m not afraid of death. It’s the stake one puts up in order to play the game of life.” – Jean Giraudoux 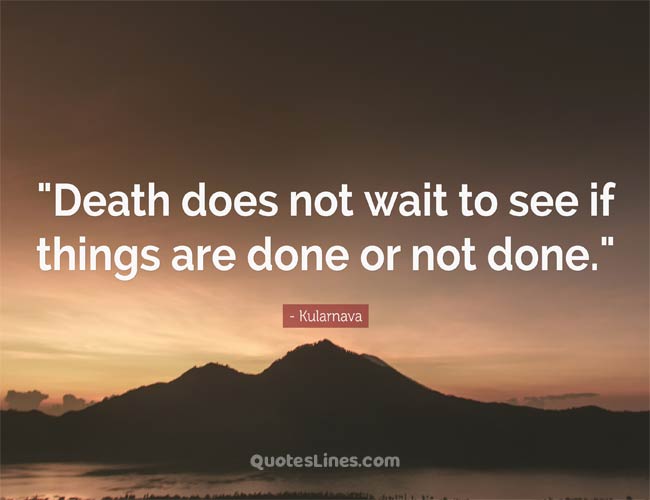 “I regret not death. I am going to meet my friends in another world.” – Ludovico Ariosto

“It is not death that a man should fear, but he should fear never beginning to live.” – Marcus Aurelius

“The funny thing about facing imminent death is that it really snaps everything else into perspective.” – James Patterson

“When it’s time to die, let us not discover that we have never lived.” – Henry David Thoreau 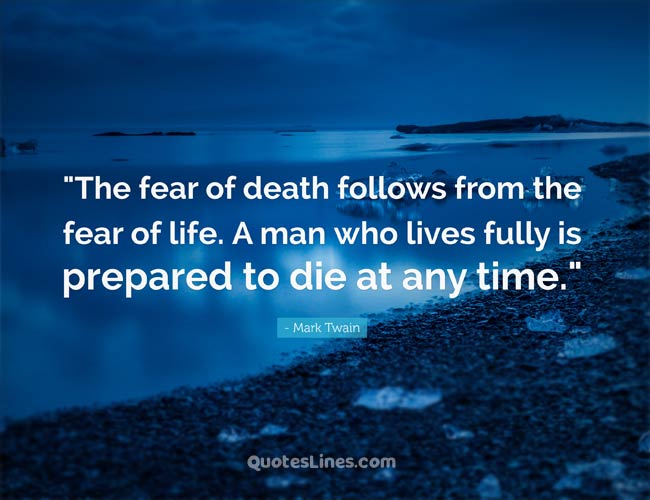 “Do not seek death. But do not fear it either. There cannot be life without death, it is inescapable.” – Keisei Tagami

“A day grows old as we do. Do not wish death upon it. Let it live, let it love, and only then should you let it rest in peace.” – Michelle C. Ustaszeski

“We sometimes congratulate ourselves at the moment of waking from a troubled dream: it may be so the moment after death.” – NATHANIEL HAWTHORNE

“God pours life into death and death into life without a drop being spilled.” – Anonymous 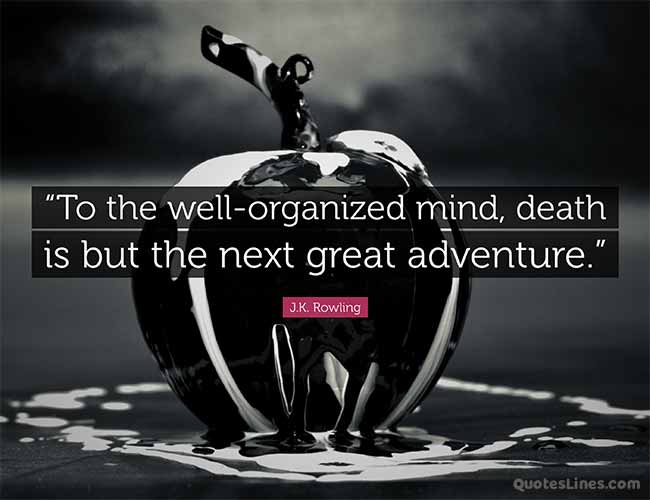 “The fear of death follows from the fear of life. A man who lives fully is prepared to die at any time.” – Mark Twain

“The grave itself is but a covered bridge, Leading from light to light, through a brief darkness!” – HENRY WADSWORTH LONGFELLOW

“Death is caused by swallowing small amounts of saliva over a long period of time.” – Attributed to George Carlin

“A man dies only a few circles in the water prove that he was ever there. And even they quickly disappear. And when they’re gone, he’s forgotten, without a trace, as if he’d never even existed. And that’s all.” – WOLFGANG BORCHERT

“There are more dead people than living. And their numbers are increasing. The living are getting rarer.” – EUGENE IONESCO 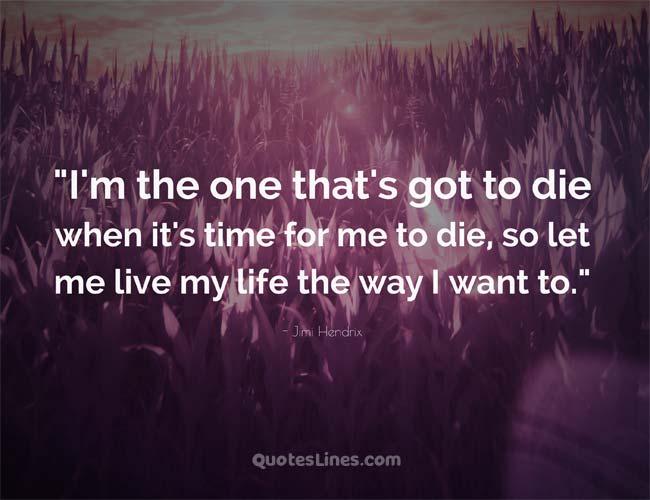 “Hope is not dead, it is just larger than our imaginations; its purpose extending far beyond our comprehension.” – Kathy Hobaugh

Losing someone to death is unavoidable but has its own way of coping up with it. We attend funerals with flowers, send grief cards and letters. We know how hard it is to develop sensitive wordings in such cases to convey support through these notes. Often, we want closure with a loss for ourselves, and reading quotes about death can be a very effective coping mechanism. In all the mentioned cases, we believe our compilation of dead quotes will help you handle heavy feelings and make your heart lighter.

Share these quotes with your friends, colleagues, family, and loved ones during their hard times. Read them when you want to be inspired to feel the beauty of life, live a little more. Send them writing on crisp heartfelt letters to someone who has lost someone to death recently. Use them on the card, social media posts, photo captions, letters, email, tributary posts, obituary, or wherever you think you can use them to add something meaningful. We promise never to disappoint you through our compilation. Death is the end of life, but our support for someone to accept death is endless.