Fake Friends and People Quotes: It’s difficult to tell who our true friends are, but it’s even more difficult to tell who our fake friends are. Not every friend we make will turn out to be a real friend. Fake friends are those that put on a pleasant face in front of us while speaking negatively about us behind our backs. Fake friends are those that do not always wish for what is best for us. A good friend would never envy or compete with you, however, a fake friend will. Have you just encountered a fake friend or fake people and are trying to recover from the feelings, thoughts, and time you wasted on them?

“Fake friends are like shadows: always near you at your brightest moments, but nowhere to be seen at your darkest hour.” – Khalil Gibran

“Better to have an enemy who slaps you in the face than a friend who stabs you in the back.” – Anonymous

“In the end, we will remember not the words of our enemies, but the silence of our friends.” – Martin Luther King Jr.

“Letting go of toxic people in your life is a big step in loving yourself.” – Hussein Nishah

“You always knew after bad things happened, who your friends really were.” – Jodi Picoult

“Being betrayed is one of the most valuable lessons life can teach.” – Shania Twain 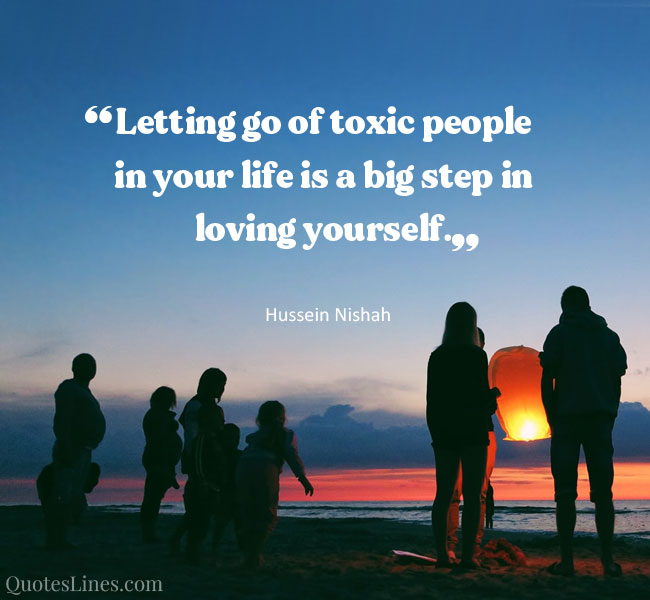 “You got nothing to lose. You don’t lose when you lose fake friends.” – Joan Jett

“I think it’s better to have less friends than to have fake friends.” – Hina Khan

“Sometimes in life, we have to create our own closure. Sometimes we have to decide when enough is enough and walk away.” – Anonymous

“Don’t fear the enemy that attacks you, but the fake friend that hugs you.” – Anonymous 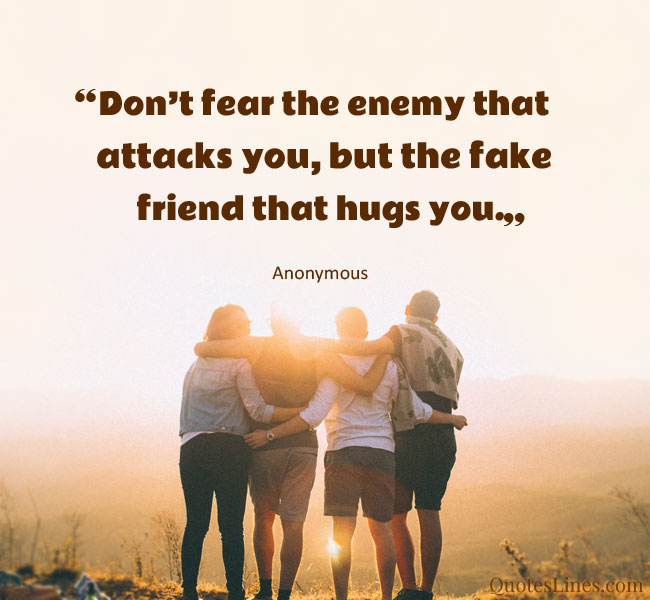 “Remember: If someone’s trying to pull you down that means they’re already beneath you.” – Karen Salmansohn

“Some people are willing to betray years of friendship just to get a little bit of the spotlight.” – Lauren Conrad

“The word ‘friend’ is a label anyone can try on. You decide who is best suited to wear it.” – Carlos Wallace

“FAKE FRIENDS: Once They Stop talking to you, they start talking about you.” – Anonymous 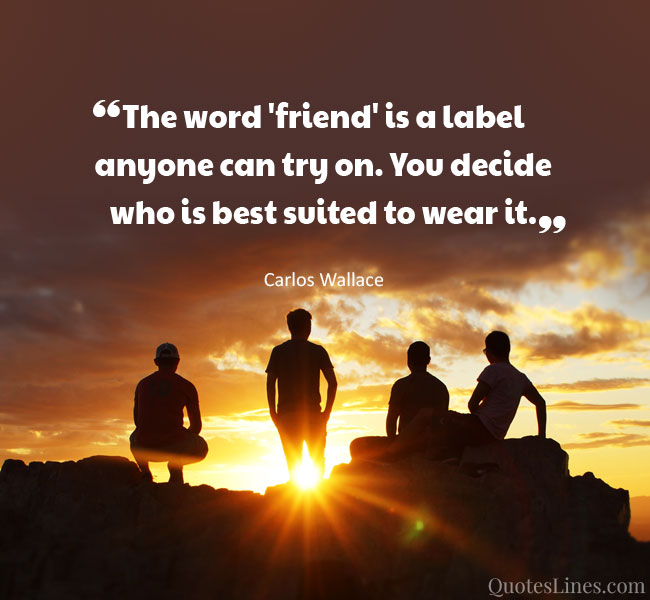 “Fake friends get mad when we don’t pretend to like them.” – Carlos Wallace

“You’re just like a penny, two-faced and worthless.” – Anonymous

“A false friend and a shadow attend only while the sun shines.” – Benjamin Franklin

“Just be honest with me or stay away from me. It’s not that difficult.” – Anonymous

“You got nothing to lose. You don’t lose when you lose fake friends.” – Joan Jett 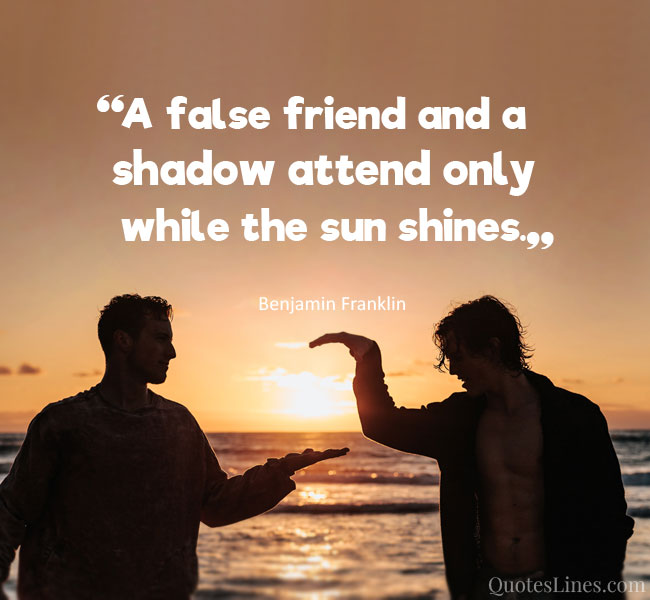 “People will stub you in the back and then ask why you’re bleeding.” – Anonymous

“I love my enemies, at-least they admit that they don’t like me.” – Anonymous

“I’m honestly starting to see who my real friends are and not, and most of them are fake.” – Anonymous

“I hate people who are two faced, if you don’t like me then stop pretending like you do.” – Anonymous

“I don’t need to have a bunch of fake friends. It’s much better to have 4 quarters than 100 pennies.” – Anonymous

“Growing up means realizing a lot of your friends aren’t really your friends.” – Anonymous

“Friendship is delicate as a glass, once broken it can be fixed but there will always be cracks.” – Waqar Ahmed 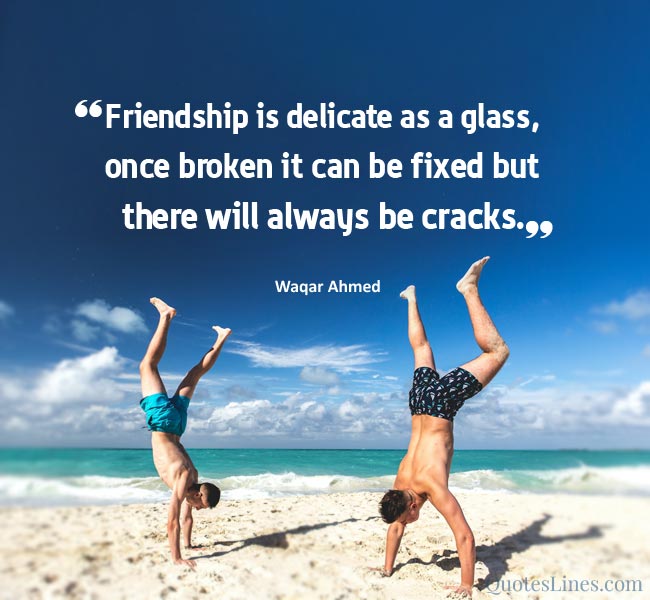 “No person is your friend who demands your silence, or denies your right to grow.” – Alice Walker

“Some people were only friends because you saw them five times a week.” – Anonymous

“This is what happens. You tell your friends your most personal secrets, and they use them against you.” – Sophie Kinsella

“Don’t listen to the malicious comments of those friends who, never taking any risks themselves, can only see other people’s failures.” – Paulo Coelho

“A man should choose a friend who is better than himself. There are plenty of acquaintances in the world; but very few real friends.” – Chinese Proverb

“We fear our enemy but the bigger and real fear is that of a fake friend who is sweetest to your face and most vile behind your back.” – Mufti Ismail Menk

“Be very careful of who you share your problem with, remember that not every friend that smiles at you is your best friend.” – Kemmy Nola

“Life is full of fake peoples but before you decide to judge them, make sure you’re not one of them.” – Anonymous

“To know true friends is really simple. Just remember who lift you when you fall. It is what friendship is all about.” – Anonymous

“Sometimes, it is a good thing to have fake people in this world. It helps you find out who your REAL friends are.” – Anonymous

“Fake friends are like Coal… when hot… they burn your hands…. when cold… they turn your hands black.” – Anonymous 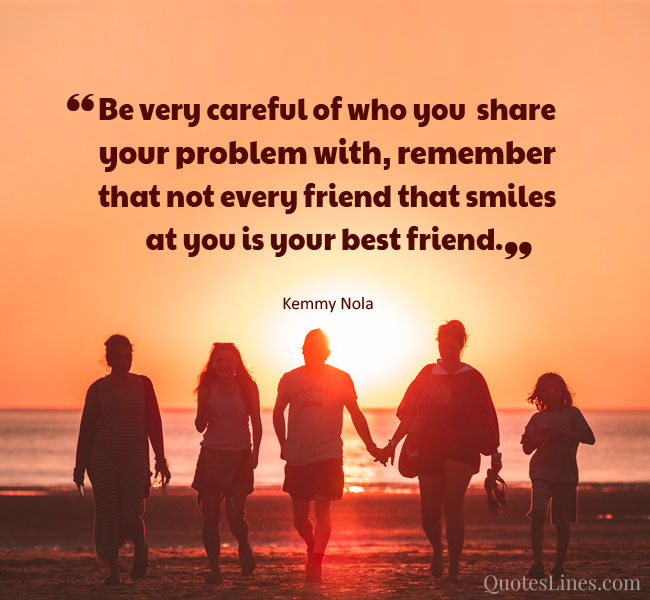 “People may not always tell you how they feel about you, but they will always show you. Pay attention.” – Keri Hilson

“Having fake friends is like hugging cactus. The tighter you hug, the more pain you get.” – Riza Prasetyaningsih

Read: Quotes About Honesty and Trust

“Chocolate friends may not last any longer than fake ones, but they sure as hell taste better.” – Kevin Brooks

“Thank God I found the GOOD in goodbye.” – Beyoncé

“Fake is the new real. You gotta keep a lot a s*ht to yourself.” – Genereux Philip 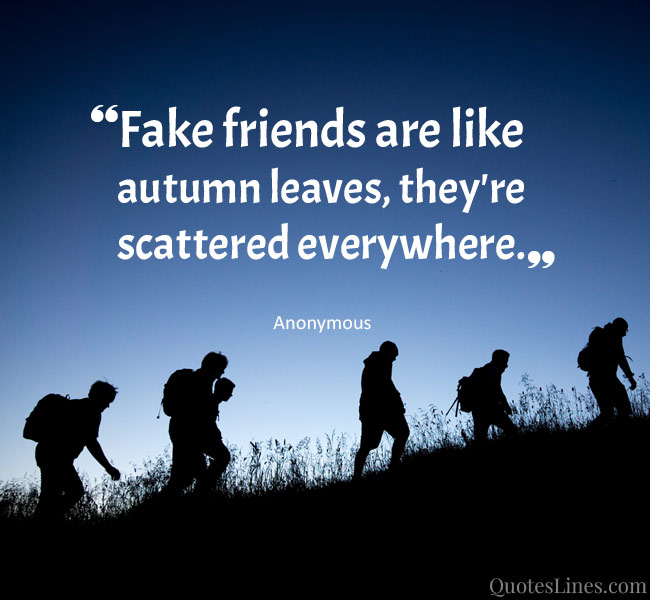 “It makes no sense to try to extend a fake friendship that was only meant to be a lesson.” – Anonymous

“It’s okay to walk out of someone’s life if you don’t feel like you belong in it anymore.” – Anonymous

“I wish everyone knew how much of a lying piece of shit you are.” – Anonymous

“Looking for your knife? You should try my back, that’s where I’ve last seen it.” – Anonymous

“While you’re busy stabbing my back, you can kiss my ass too, both sides.” – Anonymous

These insulting quotes for fake friends are just what you need when your mind is racing with all the reasons why your friend is a fake friend. We offer a wide range of quotes regarding fake friends. Read through all of the quotes, from insulting to sarcastic, and pick the ones that speak to you. Remind yourself while reading these fake friends quotes why the person you considered to be a close friend is actually a fake friend to you. We hope these quotes about fake friends make you realize how important it is for your fake friends to leave you and why should you surround yourself with true, genuine people.