Laziness is a characteristic shared by all humans, a little or more. It is all too tempting to procrastinate on all important tasks and activities. Although laying down and doing nothing might be enjoyable, it wastes valuable time in your day. Being lazy might even demotivate you from accomplishing important duties later when you actually need to complete them. That is why it is necessary not to be lazy.

We have compiled a list of lazy quotes to inspire you to forsake a lazy lifestyle and embrace an active and energetic one. We have a big selection of quotes about lazy people; you will find this quote motivating to not be lazy. We have numerous intriguing laziness quotes as well as funny laziness quotes. Make yourself more proactive and energetic by reading these lazy quotes and urging yourself or your loved one to stop being lazy in life.

“Inspiration is a guest that does not willingly visit the lazy.” – Tchaikovsky 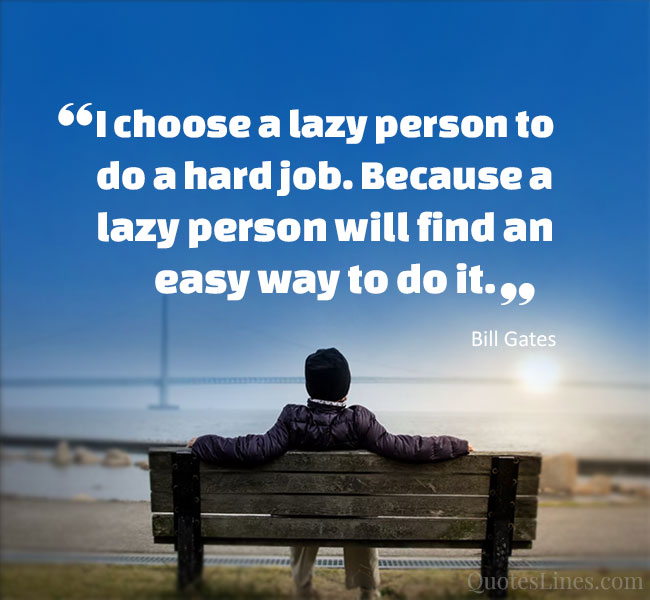 “Idleness is the Dead Sea that swallows all virtues.” – Benjamin Franklin

“Luck is always the last refuge of laziness and incompetence.” – James Cash Penney

“A life of leisure and a life of laziness are two things. There will be sleeping enough in the grave.” – Benjamin Franklin

“Any man who reads too much and uses his own brain too little falls into lazy habits of thinking.” – Albert Einstein

“Laziness is a luxurious mindset that I cannot afford to own.” – Nakia R. Laushaul 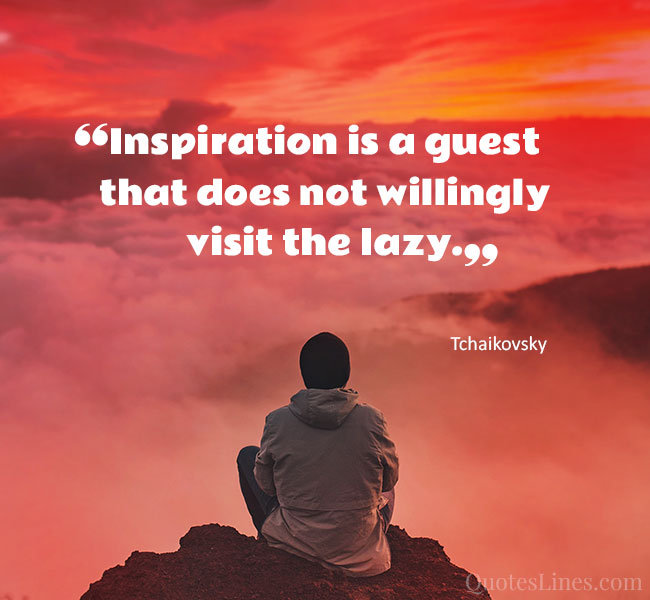 “Ambition is a poor excuse for not having sense enough to be lazy.” – Milan Kundera

“Lazy people are always anxious to be doing something.” – Luc de Clapiers

“Idleness is the parent of psychology.” – Friedrich Nietzsche

“Tomorrow is the only day in the year that appeals to a lazy man.” – Jimmy Lyons

“There is no fatigue so wearisome as that which comes from lack of work.” – Charles Spurgeon 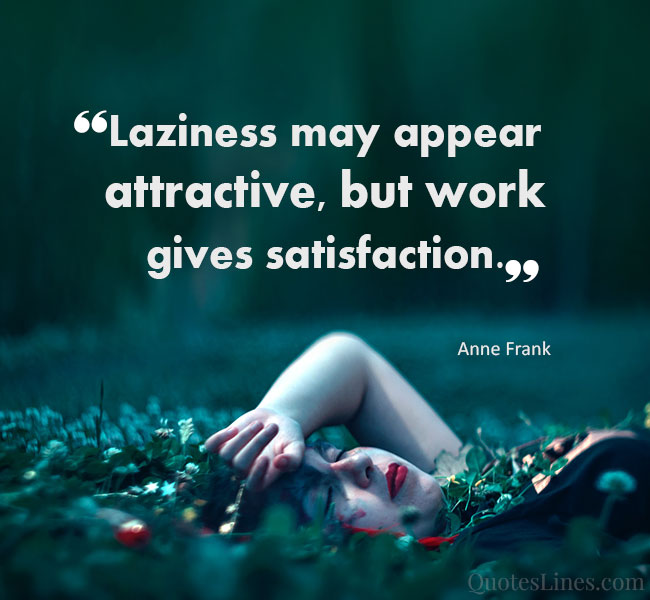 “Ignorance is a matter of laziness, indifference, and apathy.” – Tom Tancredo

“The Devil often finds work for them who find none for themselves.” – Benjamin Whichcote

“There are people, who the more you do for them, the less they will do for themselves.” – Jane Austen

“You can’t teach people to be lazy – either they have it, or they don’t. – Dagwood Bumstead”

“Ah, Sunday! It’s for pleasure forgetting all the pressure.” – Anonymous

“Lazy is a very strong word, I like to call it ‘selective participation.” – Anonymous

“Sunday, the day for the language of leisure.” – Anonymous 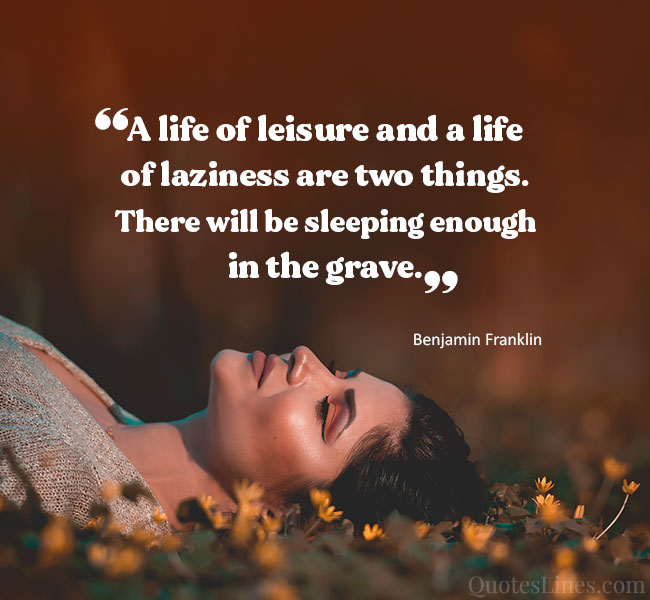 “Sometimes it pays to stay in bed in Monday, rather than spending the rest of the week debugging Monday’s code.” – Anonymous

“There is no such thing as a lazy person; He is either sick or uninspired.” – Zig Ziglar

“Laziness is nothing more than the habit of resting before you get tired.” – Jules Renard

“Failure is not our only punishment for laziness; there is also the success of others.” – Jules Renard

“If we don’t start today, it will be too late for tomorrow.” – Anthony T.Hincks

“You gotta know when to be lazy. Done correctly, it’s an art form that benefits everyone.” – Nicholas Sparks 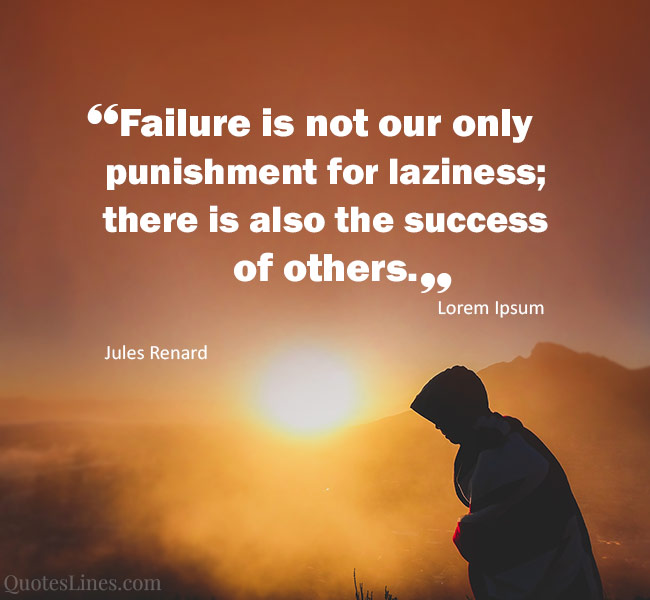 “The only time a lazy man ever succeeds is when he tries to do nothing.” – Evan Esar

“Laziness is a secret ingredient that goes into failure. But it’s only kept a secret from the person who fails.” – Robert Half

“You can have the results you want, or you can have excuses. You can’t have both.” – Clyde Lee Dennis

“People are not lazy. They simply have impotent goals – that is, goals that do not inspire them. – Tony Robbins”

“Laziness will stop your progress in your spiritual practice.” – Renuka Singh

“Work hard and become a leader; be lazy and never succeed.” – The Bible

“You cannot escape the responsibility of tomorrow by evading it today.” – Abraham Lincoln 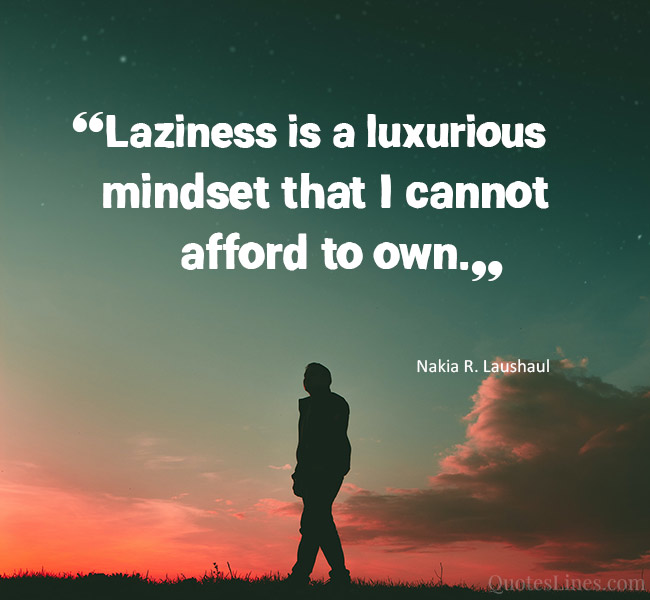 “Time slips away like grains of sand never to return again.” – Robin Sharma

“My advice is to never do tomorrow what you can do today. Procrastination is the thief of time.” – Charles Dickens

“Isn’t it funny how day by day nothing changes, but when you look back everything is different.” – C. S. Lewis

“Success is what comes after your stop making excuses.” – Luis Galarza

“Take time to deliberate; but when the time for action arrives, stop thinking and go in.” – Napoleon Bonaparte

“The only people who think life should be easy are lazy people.” – Robert Kiyosaki

“Working hard is great, being lazy sometimes is great, but failed potential is the worst.” – Campbell Scott 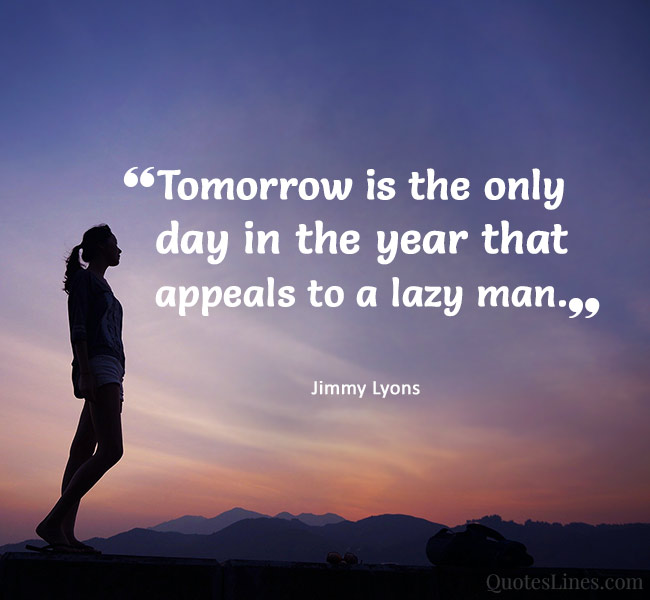 “Stop sleeping, get to work! You will have much time to sleep when you die.” – Michael Bassey Johnson

“Although laziness is common and a natural part of life, it has the potential to completely consume us.” – Chantalle Blikman

Read: Inspiring Never Give Up Quotes

“The less one has to do, the less time one finds to do it in.” – Lord Chesterfield

“The lazy always have in mind to do something.” – Vauvenargues

“I’ve heard that hard work never killed anyone, but I say why take the chance?” – Ronald Reagan 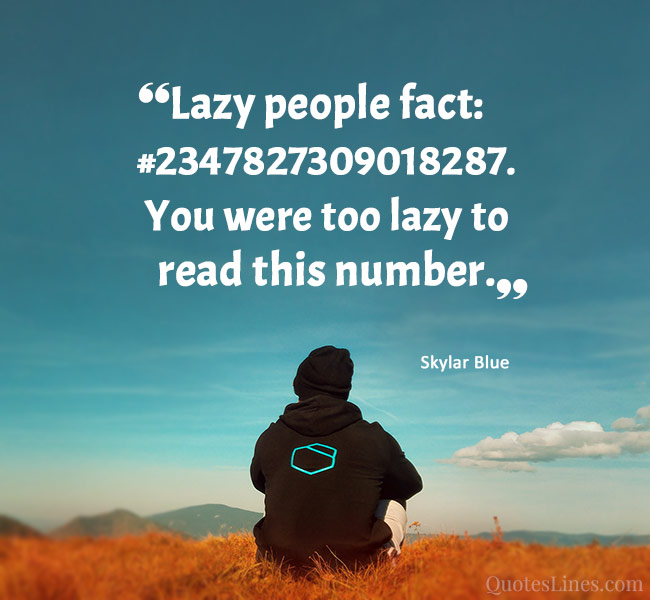 “Lazy people tend not to take chances, but express themselves by tearing down other’s work.” – Ann Rule

“To a lazy man, every day is a holiday.” – Turkish Proverb

“I’m lazy. But it’s the lazy people who invented the wheel and the bicycle because they didn’t like walking or carrying things.” – Lech Walesa

“My Saturday was going pretty well until I realized it was Sunday.” – Anonymous

“Offer the lazy an egg, and they’ll want you to peel it for them.” – Lithuanian Proverb

“If there was an award for laziness I’d probably send somebody else to pick it up for me.” – Anonymous

“There is no cure for laziness but a large family helps.” – Herbert V. Prochnow

It is difficult to break the habit of living a lazy lifestyle once you have been accustomed to it. As a result, it is important to act before you allow laziness to become a significant part of your lifestyle. Encourage yourself to accomplish tasks, even though your body urges you to avoid all responsibilities and spend your days doing nothing. It is essential to strengthening your mindset so that laziness does not take over your life. Here are some lazy quotes to get you motivated to stop being lazy. Read these lazy people’s quotes and sayings to yourself or send them to any friends or family members who have acquired laziness as a personality trait.

We also have a variety of funny quotes about laziness. It might be tough to explain to yourself or someone else about vital topics like this in a serious tone, so use these humorous quotes about laziness to explain why it is essential not to be lazy. We have a wide range of lazy quotes. It’s time to quit being a couch potato and start living an active lifestyle. Scroll up, read through the lists, and find those few lazy people quote that speaks to you the most, and read them to yourself on a regular basis to remind yourself of the necessity of not being lazy.