Saving Money Quotes: Money is incredibly essential in the world we live in. Even a minimalist needs a considerable amount of money to live a modest lifestyle. Every element of existence, including food, shelter, education, and medical needs, etc. requires the expenditure of money. It is really tough to live in this world without money.

It is important that everyone develops the practice of saving money. Saving money is a really excellent habit since it not only allows us to have the money we need for our requirements, but it also makes us more responsible. If you are looking for motivation to build a habit of saving money, you have arrived in the right place. We have prepared various quotes that serve the exact purpose. I am certain these quotes will encourage you to save money.

“Not wasting money is the best way to save money.” – Mokokoma Mokhonoana

“A penny saved is a penny earned.” – Benjamin Franklin 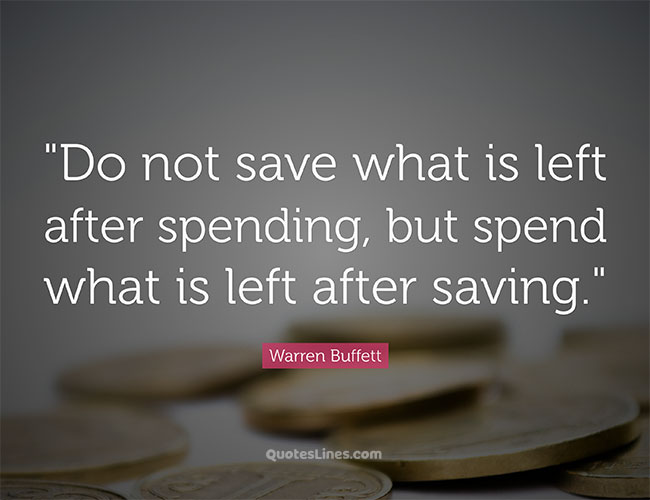 “All days are not same. Save for a rainy day. When you don’t work, savings will work for you.” – M.K. Soni

“Save one third, live on one-third, and give away one-third.” – Angelina Jolie

“If you would be wealthy, think of saving as well as getting.” – Benjamin Franklin

“Never spend your money before you have earned it.” – Thomas Jefferson

“You must gain control over your money or the lack of it will forever control you.” – Dave Ramsey

“Every time you borrow money, you’re robbing your future self.” – Nathan W. Morris 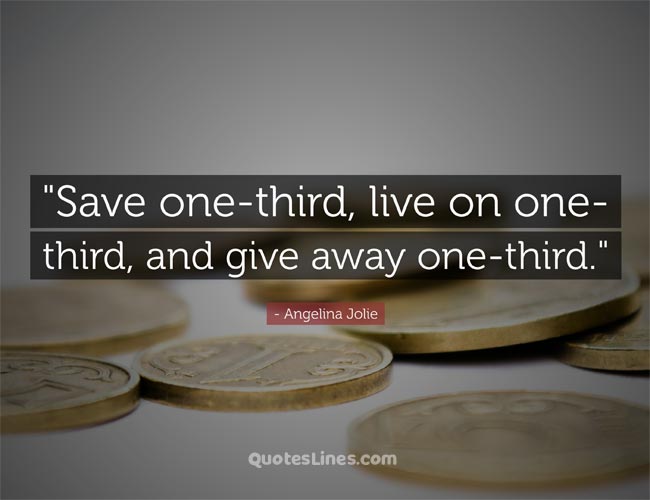 “It is great wealth to a soul to live frugally with a contented mind.” – Lucretius

“Never spend anything before thou have it; for borrowing is the canker and death of every man’s estate.” – Sir Walter Waleigh

“Saving is the gap between your ego and your income.” – Morgan Housel

“Save for retirement. Start from your first paycheck.” – Chanda Kaushik

“Laugh when you borrow and you’ll cry when you pay.” – Ken Alstad

“Save a little money each month and at the end of the year you’ll be surprised at how little you have.” – Ernest Haskins

“Bitcoin will do to banks what email did to the postal industry.” – Rick Falkvinge 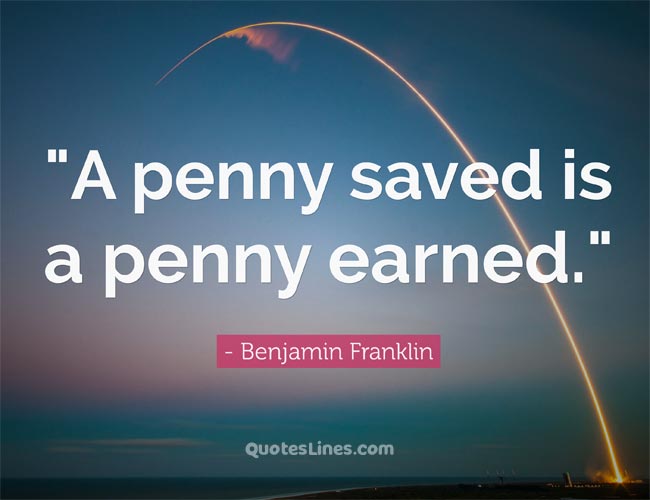 “Saving requires us to not get things now so that we can get bigger ones later.” – Jean Chatzky

“Whenever the price of cryptocurrency is rallying, people start spending a lot more.” – Erik Voorhees

“Everything is in excess except money, thereof, it should be well managed.” – Lailah Gifty Akita

“The SECRET to financial security is not to have more money, but having MORE CONTROL over the money we presently have.” – Auliq-Ice

“A budget is telling your money where to go instead of wondering where it went.” – John C. Maxwell 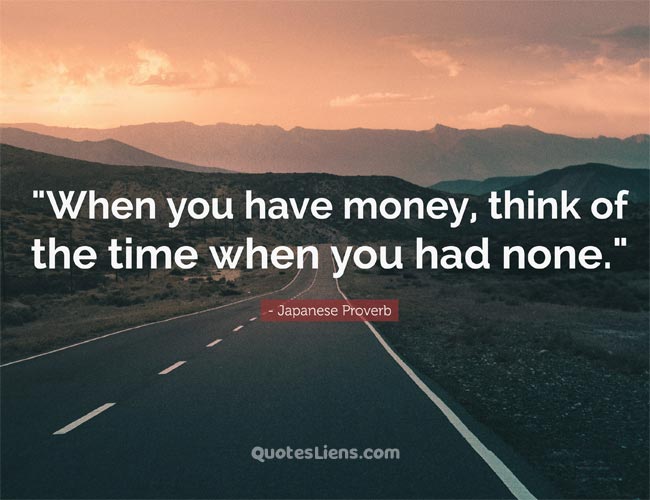 “The art is not in making money, but in keeping it.” – Proverb

“Money is like a sixth sense and you can’t make use of the other five without it.” – William Somerset Maugham

“To become rich — you must value saving more than spending.” – George Choy

“The price of anything is the amount of life you exchange for it.” – Henry David Thoreau

“He who buys what he does not need, steals from himself.” – Swedish Proverb 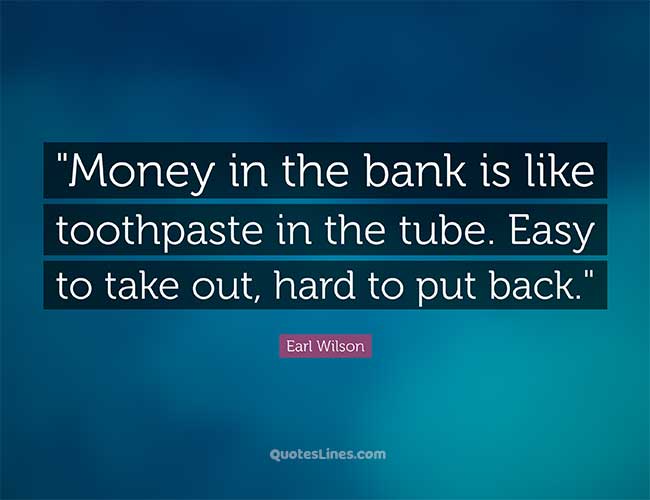 “A man who both spends and saves money is the happiest man, because he has both enjoyments.” – Samuel Johnson

“Many people take no care of their money till they come nearly to the end of it, and others do just the same with their time.” – Johann Wolfgang von Goethe

“Keep your eyes on the price when spending, don’t regret later to find that you have nothing for tomorrow.” – Auliq Ice

“Save money on the big, boring stuff so that you have something left over for life’s little pleasures.” – Elisabeth Leamy

“Money is only a tool. It will take you wherever you wish, but it will not replace you as the driver.” – Ayn Rand

“Balancing your money is the key to having enough.” – Elizabeth Warren 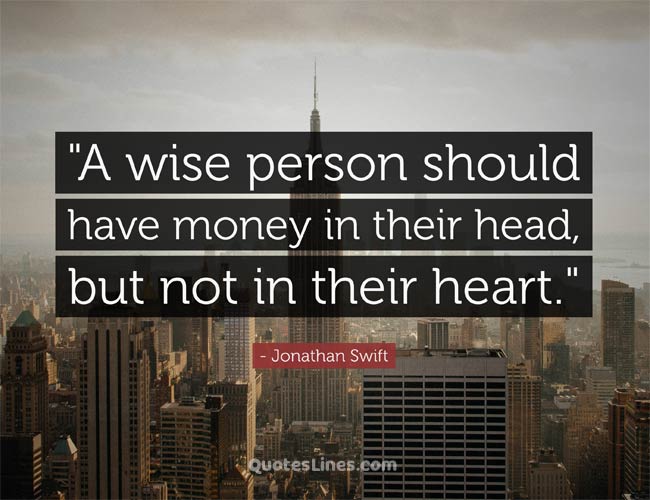 “The habit of saving is itself an education; it fosters every virtue, teaches self-denial, cultivates the sense of order, trains to forethought, and so broadens the mind.” – T.T. Munger

“Look everywhere you can to cut a little bit from your expenses. It will all add up to a meaningful sum.” – Suze Orman

“The art is not in making money, but in keeping it.” – Proverb

“Wealth gained hastily will dwindle, but whoever gathers little by little will increase it.” – Proverbs 13:11

“On the first day of each week, you should each put aside a portion of the money you have earned. Don’t wait until I get there and then try to collect it all at once.” – 1 Corinthians 16:2

“For wisdom is protection just as money is protection, but the advantage of knowledge is that wisdom preserves the lives of its possessors.” – Ecclesiastes 7:12

“The plans of the diligent certainly lead to profit, but anyone who is reckless certainly becomes poor.” – Proverbs 21:5

“The wise have wealth and luxury, but fools spend whatever they get.” – Proverbs 21:20 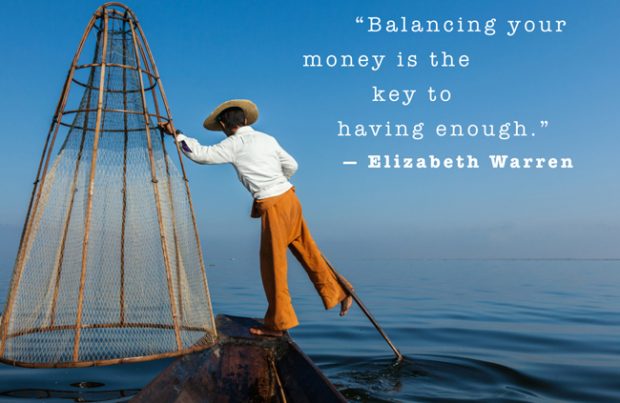 “The plans of the diligent lead to profit as surely as haste leads to poverty.” – Proverbs 21:5

“Riches do not profit in the day of wrath, but righteousness delivers from death.” – Proverbs 11:4

“The master said, ‘Well done, my good and faithful servant. You have been faithful in handling this small amount, so now I will give you many more responsibilities. Let’s celebrate together!” – Matthew 25:23

“For which of you, desiring to build a tower, does not first sit down and count the cost, whether he has enough to complete it?” – Luke 14:28

“A slack hand causes poverty, but the hand of the diligent makes rich. He who gathers in summer is a prudent son, but he who sleeps in harvest is a son who brings shame.” – Proverbs 10:4-5

“A good man leaves an inheritance to his children’s children, but the sinner’s wealth is laid up for the righteous.” – Proverbs 13:22

“For the love of money is a root of all kinds of evils. It is through this craving that some have wandered away from the faith and pierced themselves with many pangs.” – I Timothy 6:10

“Keep your life free from the love of money, and be content with what you have, for He has said, ‘I will never leave you or forsake you.” – Hebrews

Read: Success Quotes That Will Inspire To Be Successful

“Money, if it does not bring you happiness, will at least help you be miserable in comfort.” – Helen Gurley Brown

“Saving is a very fine thing. Especially when your parents have done it for you.” – Winston Churchill 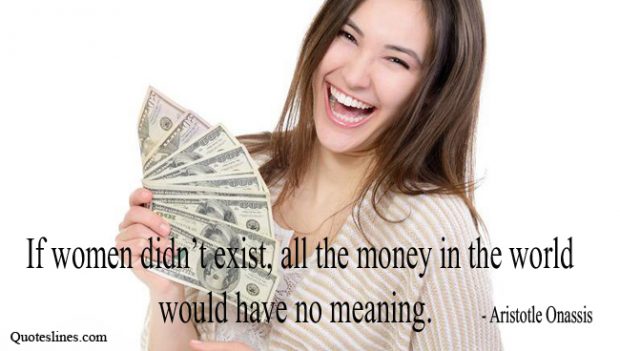 “Money is the opposite of the weather. Nobody talks about it, but everybody does something about it.” – Rebecca Johnson

“Money in the bank is like toothpaste in the tube. Easy to take out, hard to put back.” – Earl Wilson

“I made my money the old-fashioned way. I was very nice to a wealthy relative right before he died.” – Malcolm Forbes

“The safest way to double your money is to fold it over and put it in your pocket.” – Kin Hubbard

“A bank is a place that will lend you money if you can prove that you don’t need it.” – Bob Hope

“Money isn’t the most important thing in life, but it’s reasonably close to oxygen on the “gotta have it” scale.” – Zig Ziglar

“If only God would give me some clear sign! Like making a large deposit in my name at a Swiss bank.” – Woody Allen 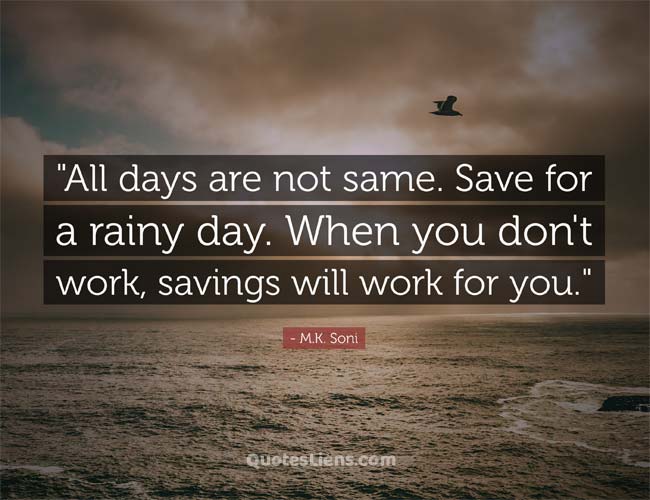 “If you can count your money, you don’t have a billion dollars.” – J. Paul Getty

“You can be young without money, but you can’t be old without it.” – Tennessee Williams

“He who marries for love without money has good nights and sorry days.” – Anonymous

“I’m stuck between “I need to save money.” and “You only live once.” – Anonymous

“Anybody who tells you money is the root of all evil doesn’t f—ing have any.” – Boiler Room

“Always borrow money from a pessimist. He won’t expect it back.” – Oscar Wilde

“Money won’t make you happy… but everybody wants to find out for themselves.” – Zig Ziglar 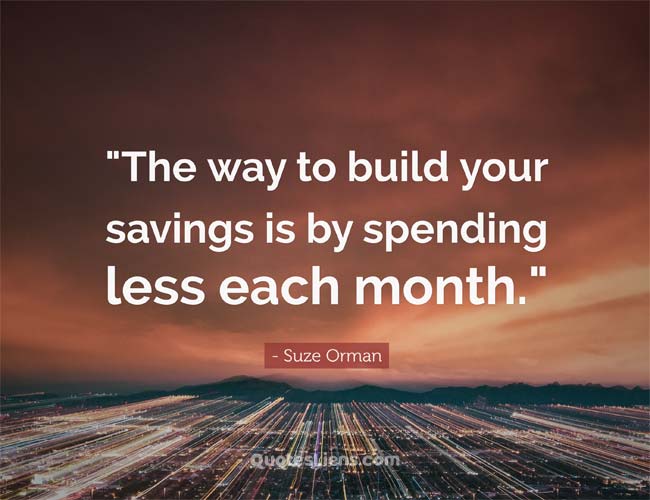 “If saving money is wrong, I don’t want to be right!” – William Shatner

“Money is not the most important thing in the world. Love is. Fortunately, I love money.” – Jackie Mason

“No matter how hard you hug your money, it never hugs back.” – P.S.I love you

“Money is better than poverty, if only for financial reasons.” – Woody Allen

“If women didn’t exist, all the money in the world would have no meaning.” – Aristotle Onassis 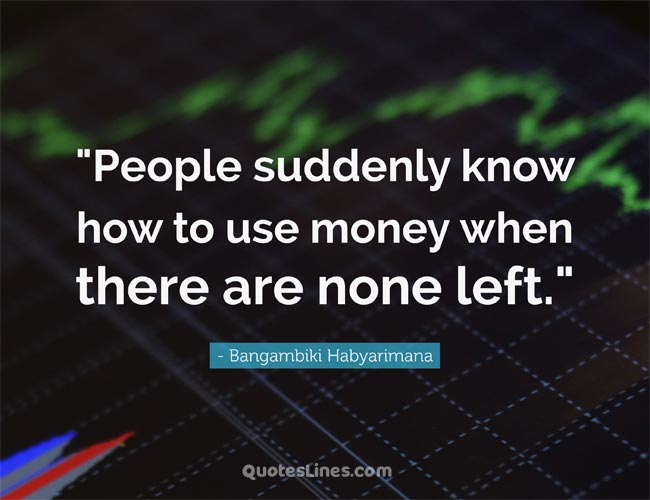 “A man who both spends and saves money is the happiest man, because he has both enjoyments.” – Samuel Johnson

“Money and women are the most sought after and the least known about of any two things we have.” – Will Rogers

“Don’t stay in bed, unless you can make money in bed.” – George Burns

“It is never too early to encourage long-term savings.” – Ron Lewis

“When you have money, think of the time when you had none.” – Japanese Proverb

“A simple fact that is hard to learn is that the time to save money is when you have some.” – Joe Moore 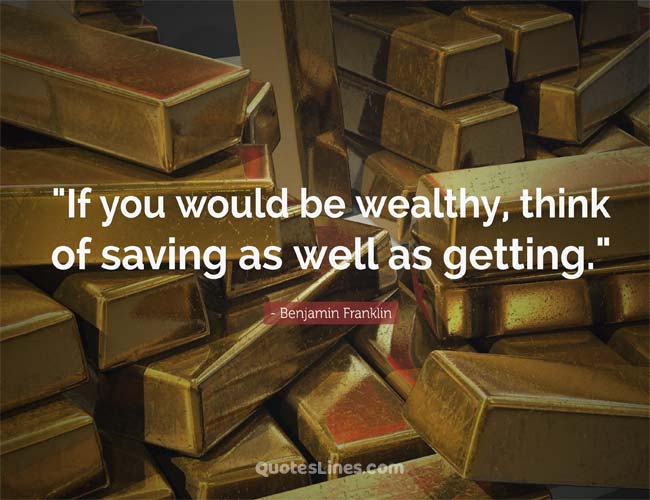 “You must learn to save first and spend afterwards.” – John Poole

“Save money and money will save you.” – Jamaican Proverbs

“The way to build your savings is by spending less each month.” – Suze Orman

“Savings, remember, is the prerequisite of investment.” – Campbell R. McConnel

“A wise person should have money in their head, but not in their heart.” – Jonathan Swift 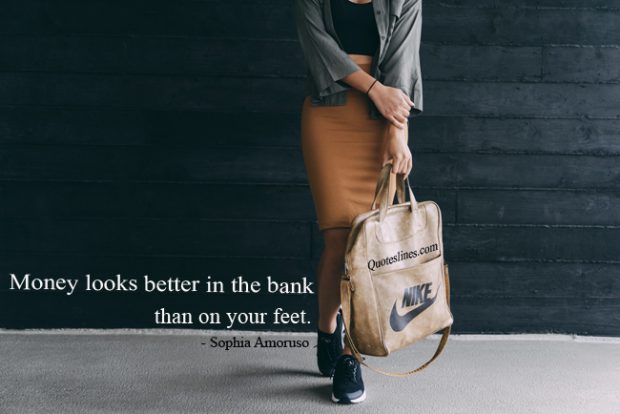 “Balancing your money is the key to having enough.” – Elizabeth Warren

“Economy is a savings-bank, into which men drop pennies, and get dollars in return.” – Henry Wheeler Shaw

“Money looks better in the bank account than on your feet.” – Sophia Amoruso

“Money is something you have to make in case you don’t die.” – Max Asnas

“The waste of money cures itself, for soon there is no more to waste.” – M.W. Harrison

“Money, like emotions, is something you must control to keep your life on the right track.” – Natasha Munson

“Many folks think they aren’t good at earning money, when what they don’t know is how to use it.” – Frank A. Clark

“If you wish to get rich, save what you get. A fool can earn money; but it takes a wise man to save and dispose of it to his own advantage.” – Brigham Young 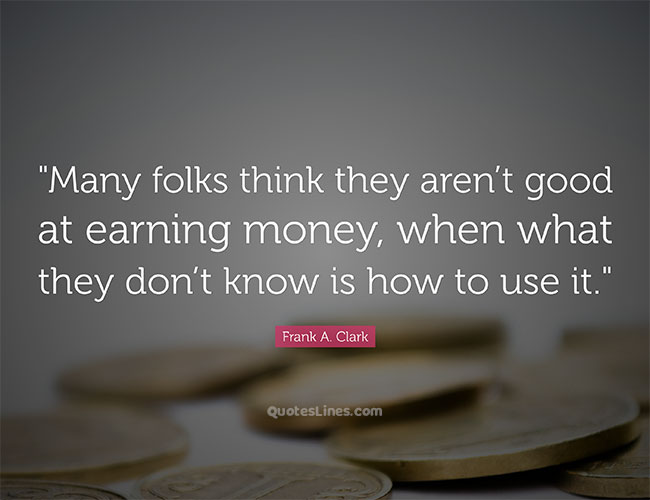 “Money is a guarantee that we may have what we want in the future. Though we need nothing at the moment it insures the possibility of satisfying a new desire when it arises.” – Aristotle

Saving money is important, but it is equally important to make sure you’re investing your money properly and spending it wisely. If you’re going to spend your money on things that aren’t necessary without considering whether you’ll have enough left for the vital things, saving money in the first place becomes meaningless. That is why, before you spend your money on something, think about whether you might get any of these specific products at a better price, so you don’t make an unnecessary expensive purchase and save more money.

Making such decisions help you become more responsible. Even if saving money is a good thing to do, it might appear difficult since there are many tempting items, such as a favorite cuisine or a favorite branded product, and it becomes a necessity to acquire those products, making the habit of saving money more difficult. In times of those, it is also helpful to have some motivation that will encourage you to keep saving money, rather than spending it on things. In this article, we have prepared for you motivational quotes that will encourage you not only to save money but also to spend your money wisely after saving it. Scroll through the quotes and find your favorite!