Transgender Quotes: Searching for inspirational transgender quotes that radiate powerful words of support, acceptance, and love? Then you just arrived at the right place! Transgender people are those whose gender identities are different from the sex they were assigned at birth. They can be non-binary or genderqueer. In a world filled with discrimination and prejudices, the transgender community faces tremendous bias on a regular basis. Many of them experience gender dysphoria. Also, their mental health gets torn apart.

There are many cases of transgender people attempting suicide. They often suffer from violence, bullying, and even rape. But they are human beings. No different, no less than anyone else in the world. So, whether you are a trans person or someone who wants to be a better ally to the trans and LGBTQ community, these transgender rights quotes are definitely worth your time.

“We should indeed keep calm in the face of difference, and live our lives in a state of inclusion and wonder at the diversity of humanity.” – George Takei

“All of us are put in boxes by our family, by our religion, by our society, our moment in history, even our own bodies. Some people have the courage to break free.” – Geena Rocero

“There isn’t a trans moment. It’s just a presence where there was an absence. We deserve so much more.” – Hari Nef 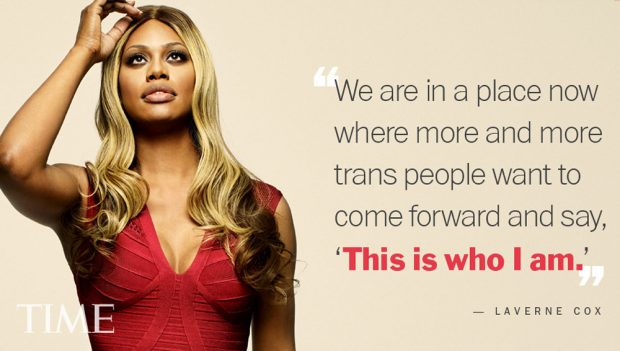 “All men are liars, said Roberta Muldoon, who knew this was true because she had once been a man.” – John Irving

“I think there’s a tremendous amount of guilt that goes on between mothers and daughters, no matter how good or bad their relationships are.” – Elliot Page

“We deserve to experience love fully, equally, without shame and without compromise.” – Elliot Page

“Me? I had no dreams. No longings. Dreams only set you up for disappointment. Plus, you had to have a life to have dreams of a better life.” – Julie Anne Peters

“Be the change that you wish to see in the world.” – Mahatma Gandhi 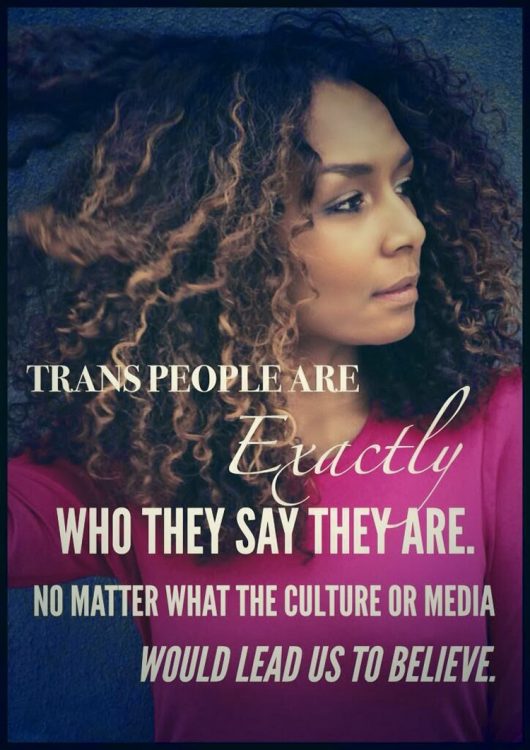 “Be who you are and say what you feel, because those who mind don’t matter, and those who matter don’t mind.” – Bernard M. Baruch

“The transgender community deserves the dignity and respect that most people take for granted.” – Ed Murray

“We are not what other people say we are. We are who we know ourselves to be, and we are what we love.” – Laverne Cox 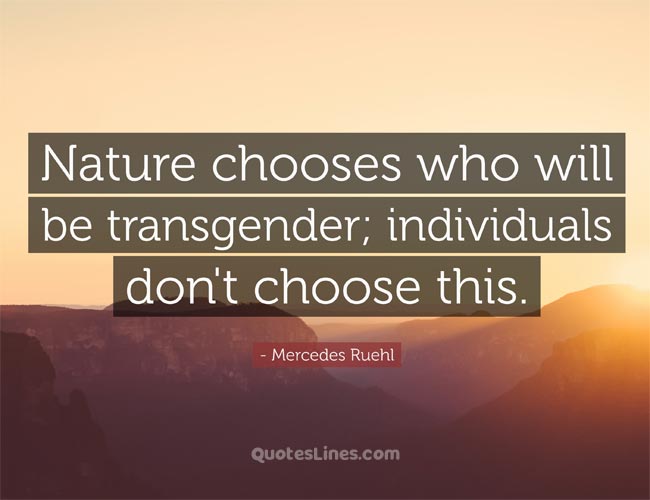 “I believe much more in love and heart. That’s much bigger than to see what you have in the middle of your legs.” – Lea T

“Trans people deserve something vital. They deserve your respect. And from that respect comes a more compassionate community, a more empathetic society, and a better world for all of us.” – Caitlyn Jenner

“When a trans woman gets called a man, that is an act of violence.” – Laverne Cox

“In a world where masculinity is respected and femininity is regularly dismissed, it takes an enormous amount of strength and confidence for any person, whether female or male-bodied, to embrace their feminine self.” – Julia Serano 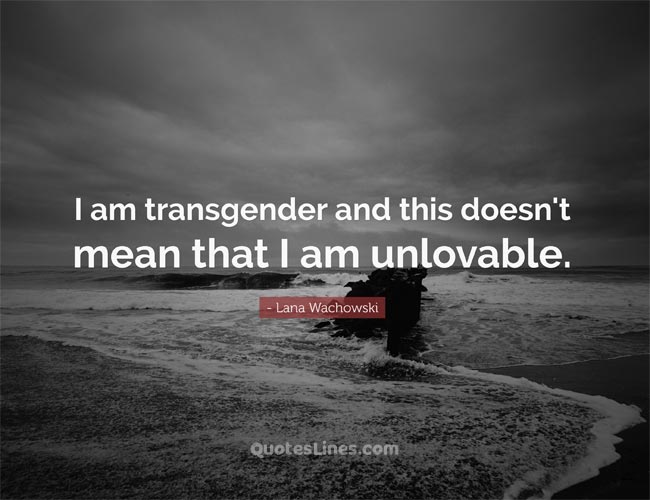 “Please, I’m a transgender former boy-bander. You think I don’t know how to defend myself?” – Libba Bray

“Don’t be ashamed of your story. It just might inspire someone.”

“It is revolutionary for any trans person to choose to be seen and visible in a world that tells us we should not exist.” – Laverne Cox

“Transgender discrimination is the civil rights issue of our time.” – Joe Biden

“I am transgender and this doesn’t mean that I am unlovable.” – Lana Wachowski

“The best thing about being a girl is, now I don’t have to pretend to be a boy.” – Avery Jackson 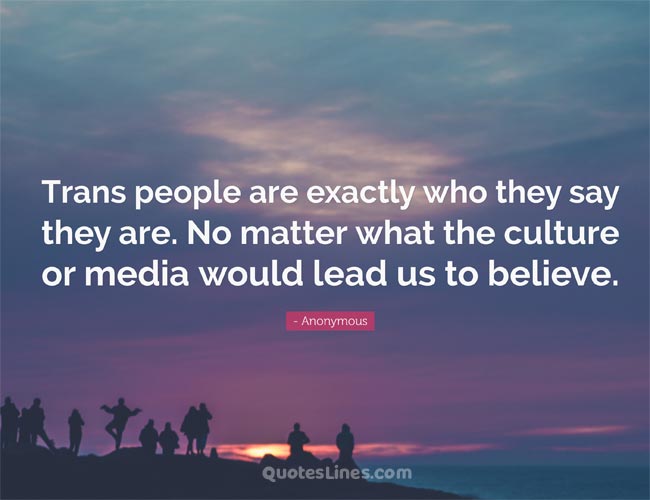 “We have to be visible. We are not ashamed of who we are.” – Sylvia Rivera

“Love him and let him love you. Do you think anything else under heaven really matters?” – James Baldwin

“Remember this, whoever you are, however you are, you are equally valid, equally justified, and equally beautiful.” – Juno Dawson

“Nature made a mistake, which I have corrected.” – Christine Jorgensen

“But you can only lie about who you are for so long without going crazy.” – Ellen Wittlinger 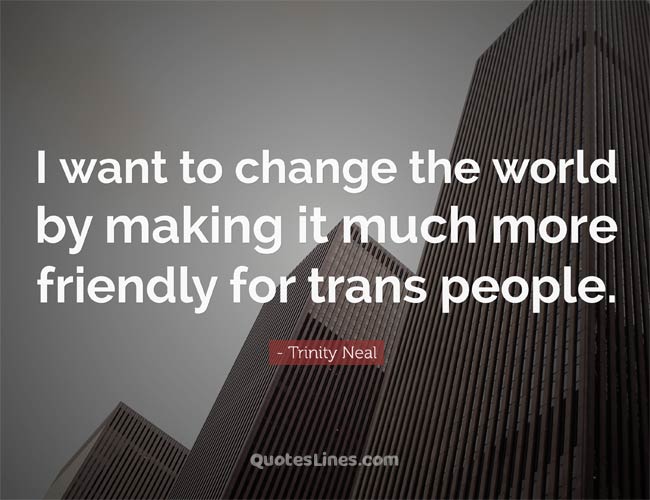 “Include everyone, no matter their gender, sexual orientation, race, or religion. We are all human beings and we are part of society.” – Lea T

“It is during our darkest moments that we must focus to see the light.” – Aristotle Onassis

“Ultimately, the transgender question is about more than just sex. It’s about what it means to be human.” – Russell D. Moore

“Everyone gets cards at the beginning of life. I am transgender, I decided to be honest and tell everyone about it, and that’s it.” – Eddie Izzard

“Trans people are extraordinary, strong, intelligent, persistent and resilient. We have to be. And we will not stand for the picking and choosing of rights. We still have hope.” – Grace Dolan-Sandrino

“Despite the constant hatred we face as the LGBTQ+ community, we must stand united and strong in spreading our message of love.” – Jazz Jennings

“By doing the work to love ourselves more, I believe we will love each other better.- Laverne Cox”

“But you can only lie about who you are for so long without going crazy.” – Ellen Wittlinger

“I learned a lot more about transgender people. It’s not a choice, but a physiological condition that has to do with the size of the hypothalamus part of the brain.” – Mercedes Ruehl

“We need to say, with one voice, that transgender people are valued, they are loved, they are us, they desire to be treated fairly and equally.” – Anonymous 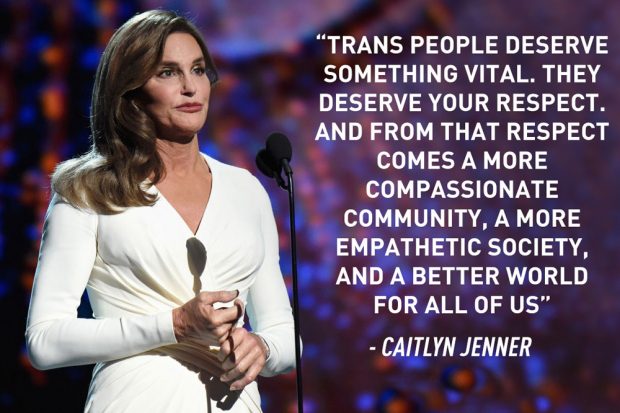 “In many states, it is legal to deny someone housing for being transgender. That is wrong and must end.” – Sen. Bernie Sanders

“Nature chooses who will be transgender; individuals don’t choose this.” – Mercedes Ruehl

“A lot of parents never speak to their transgender kids again that’s not the case in my family.” – Chaz Bono

“Being transgender isn’t a medical transition. It’s a process of learning to love yourself for who you are.” – Jazz Jennings

“If a man is called a woman, that’s the biggest insult he could get. Is that because women are considered something less!” – Andrej Pejic 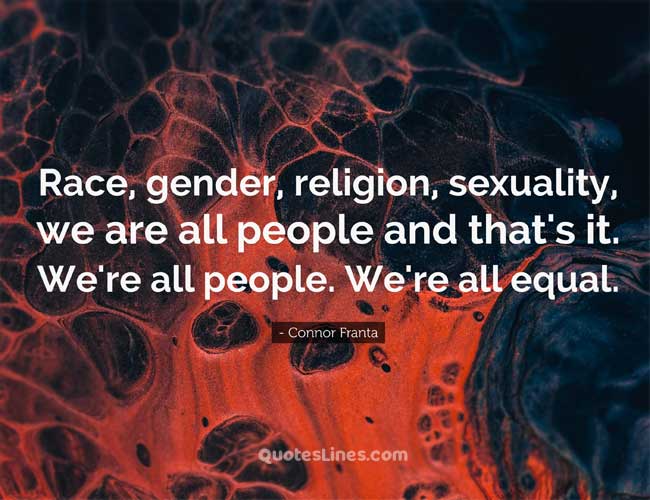 “I want to change the world by making it much friendlier for trans people.” – Trinity Neal

“I look like a woman on the outside, but on the inside I’m just me.” – Pari Roehi

“Not a boy or a girl, not any binary, rigid definition of a person. Just my everything.” – Leah Raeder

“As transgender women, we are very unique and special creatures and that’s something to be proud.” – Avery Grey

“Healthcare for trans women is a necessity. It is not elective. It is not cosmetic. It is lifesaving.” – Laverne Cox

“I threw away all my boys’ clothes and started wearing makeup.” – Teddy Geiger 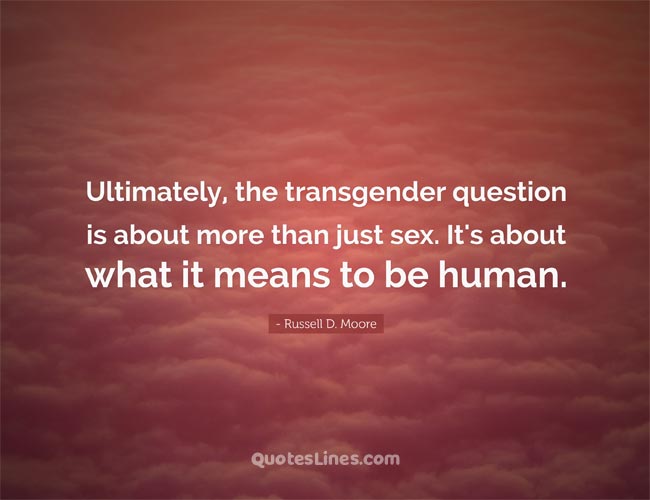 “I figured out who I was very early on actually, at the age of 13, with the help of the Internet. So, I knew that a transition, becoming a woman, was always something I needed to do.” – Andreja Pejic

“I took drama class because I was amazing at acting like a girl.” – Anonymous

“Gender preference does not define you. Your spirit defines you.” – P.C. Cast

“The beauty of standing up for your rights is others see you standing and stand up as well.” – Cassandra Duffy

“I am a strong, black, lesbian woman. Every single time I say it, I feel so much better.” – Brittney Griner 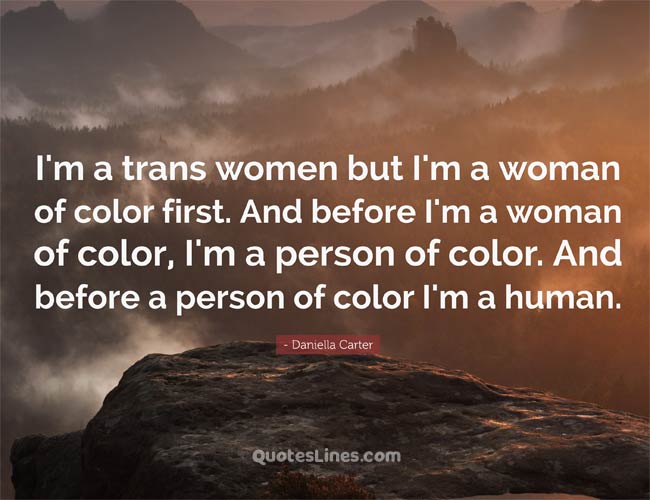 “I think being gay is a blessing, and it’s something I am thankful for every single day” – Anderson Cooper

“The most important thing in life is that you are true to yourself.” – Caitlyn Jenner

“Gender roles are like languages, with men expected to ‘speak’ their version of ‘masculinity’, and women ‘femininity.” – Juliet Jacques

“Trans people are exactly who they say they are. No matter what the culture or media would lead us to believe.” – Anonymous 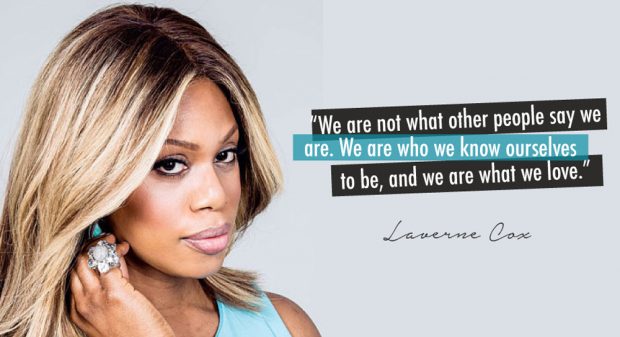 “I have a voice, there are so many that do not have a voice. I can’t speak for them. But I’m an expert on my story.” – Caitlyn Jenner

“We are in a place now where more and more trans people want to come forward and say, “This is who I am.” – Laverne Cox

“No one has the right to demand that your body be something other than what it is.” – Agnostic Zetetic

“Seeing a black transgender woman embracing and loving everything about herself might be inspiring to some other folks.” – Laverne Cox

How many people are aware of the trans community and trans rights? How many of us treat them equally? How many of us respect them? Sadly most people in our society don’t even understand their struggles, let alone acknowledge their identity. Moreover, most transgender people don’t get support from their own families. But all they want from society is acceptance and validation for what they are. When we talk about trans right, it isn’t any different from human rights. They deserve proper love, respect, and, of course, safety. Unfortunately, many countries’ laws are still transphobic and homophobic despite all efforts by its advocates.

However, many activists are fighting for their rights. By educating people about the trans community, raising awareness of their rights, we can bring about equity and acceptance. We have to unlearn the prejudices we have in our society and learn about their struggles. We have made a list of powerful transgender quotes that embody trans people’s struggles in the community. Hope we’ll be able to build a world full of love for them! And don’t forget to share them to spread the message of love, unity, and acceptance.