Creativity Quotes: A human being’s intellect is enormous. Humans have created millions of inventions and innovations through scratch and creativity from the dawn of time in order to make the world a better place to live. Human creativity is without a doubt one of the greatest gifts our earth has ever had. Humans’ imaginations are so vast that they can sit motionlessly and travel the entire moon in their minds.

The creativity of an individual comes from within, there are no limitations of an individual’s creativity. Every individual has different ideas and is creative in their own unique way, whether it is to be submitted for a national competition or for a simple sketch for fun. There is creativity within you as well. The list of quotes on creativity we have gathered will surely inspire you to look for the innovative, creative, imaginative person you might be inside.

“Creativity comes from a conflict of ideas.” – Donatella Versace

“Creativity involves breaking out of expected patterns in order to look at things in a different way.” – Edward de Bono 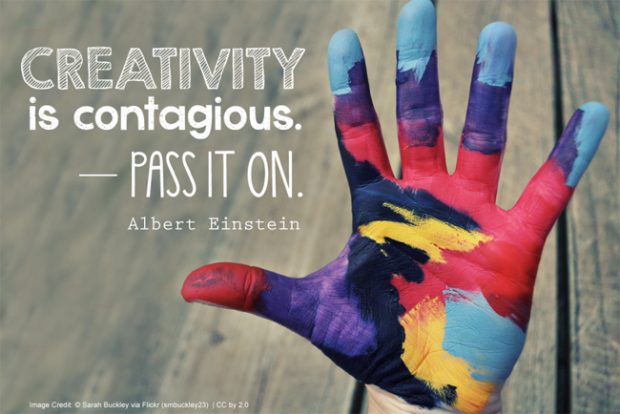 “Creativity is contagious, pass it on.” – Albert Einstein

“The chief enemy of creativity is good sense.” – Pablo Picasso

“The creative adult is the child who survived.” – Ursula Leguin

“Creativity is a drug I cannot live without.” – Cecil B. DeMille 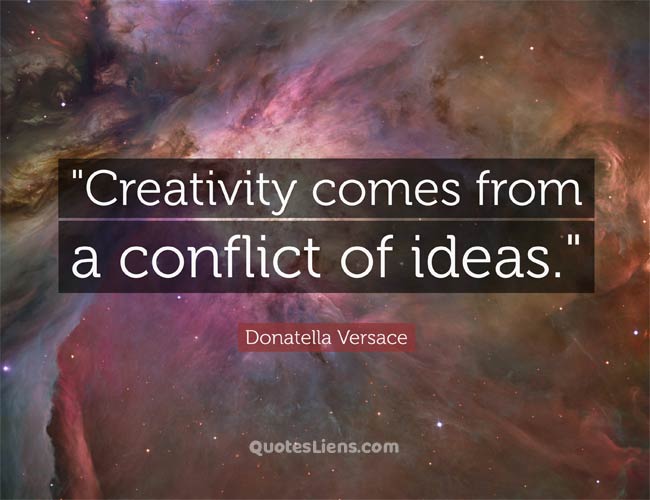 “You can’t use up creativity. The more you use the more you have.” – Maya Angelou

“Creativity is knowing how to hide your sources.” – C.E.M. Joad

“If you want something new, you have to stop doing something old.” – Peter Drucker

“Clean out a corner of your mind and creativity will instantly fill it.” – Dee Hock

“The worst enemy to creativity is self-doubt.” – Sylvia Plath 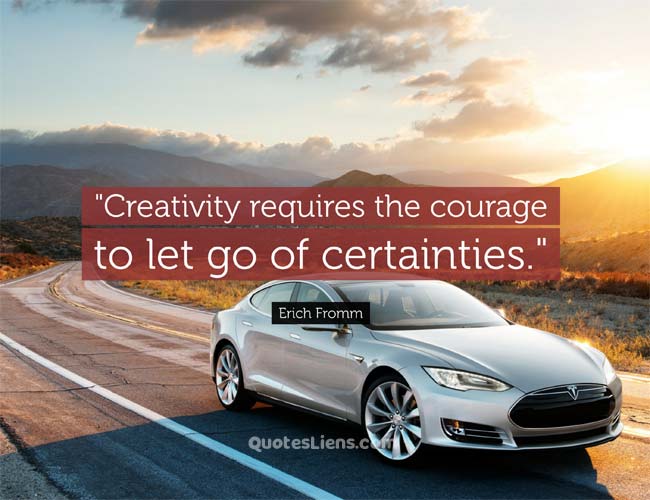 “Life is about trying things to see if they work.” – Ray Bradbury

“The world is not limited by IQ. We are all limited by bravery and creativity.” – Astro Teller

“Every block of stone has a statue inside it and it is the task of the sculptor to discover it.” – Michelangelo

“You can’t wait for inspiration, you have to go after it with a club.” – Jack London 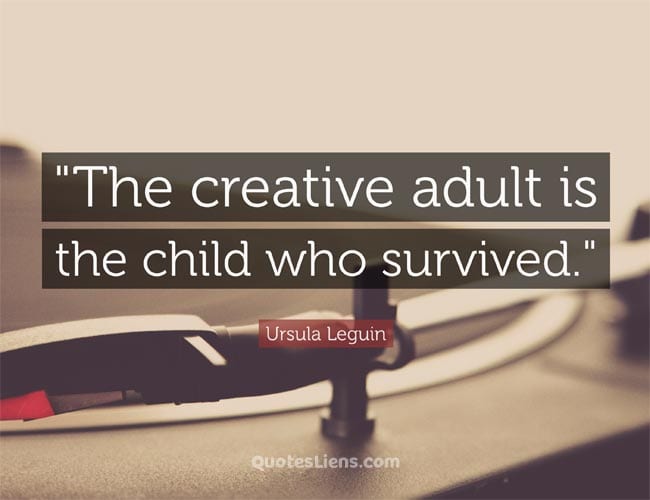 “Creativity is a type of learning process where teacher and pupil are located in the same individual.” – Arthur Koestler

“Creativity is a habit, and the best creativity is the result of good work habits.” – Twyla Tharp

Quotes on Creativity and Imagination

“Everything you can imagine is real.” – Pablo Picasso

“Science does not know its debt to imagination.” – Ralph Waldo Emerson

“Imagination is everything. It is the preview of life’s coming attractions.” – Albert Einstein

“You can’t depend on your eyes when your imagination is out of focus.” – Mark Twain

“The world is but a canvas to the imagination.” – Henry David Thoreau 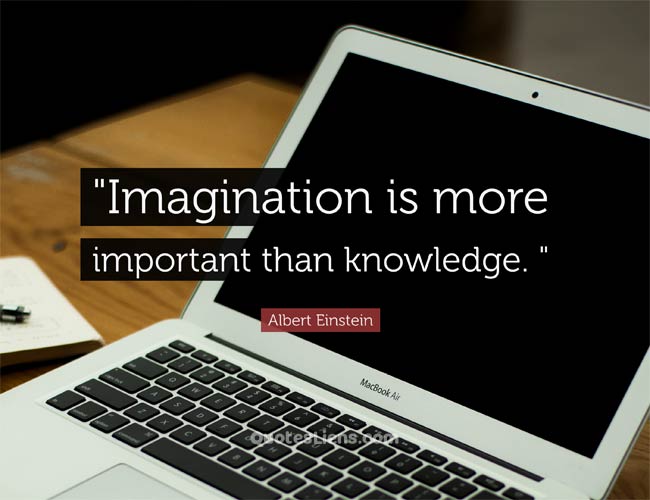 “When you’re curious, you find lots of interesting things to do.” – Walt Disney

“The true sign of intelligence is not knowledge but imagination.” – Albert Einstein

“Imagination and fiction make up more than three-quarters of our real life.” – Simone Weil

“The Possible slow fuse is lit By the Imagination.” – Emily Dickinson 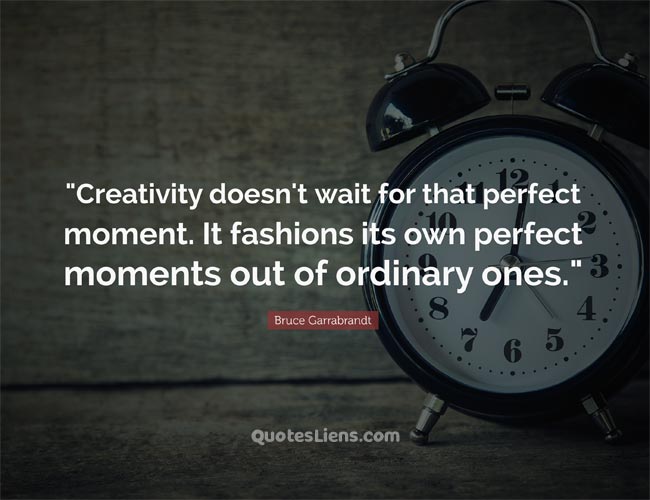 “Imagination is the beginning of creation. You imagine what you desire, you will what you imagine, and at last, you create what you will.” – George Bernard Shaw

“You see things; and you say, ‘Why?’ But I dream things that never were; and I say, ‘Why not’?” – George Bernard Shaw

Quotes on Innovation and Creativity

“Vulnerability is the birthplace of innovation, creativity, and change.” – Brené Brown

“Innovation is taking two things that already exist and putting them together in a new way.” – Tom Freston 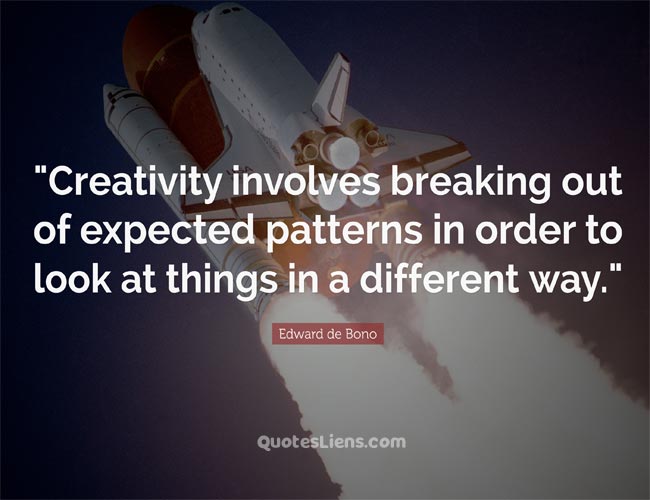 “A key ingredient in innovation is the ability to challenge authority and break rules.” – Vivek Wadhwa

“The place of exciting innovation where the action is that’s Rhode Island!” – Donald L. Carcieri

“There is no innovation and creativity without failure. Period.” – Brene Brown

“Innovation is creativity with a job to do.” – John Emmerling 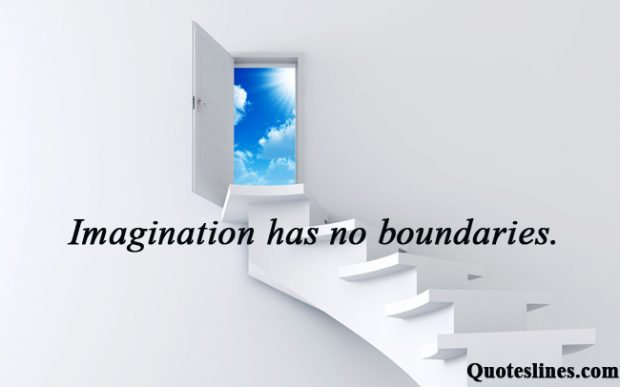 “The heart and soul of the company is creativity and innovation.” – Bob Iger

“If you look at history, innovation doesn’t come just from giving people incentives; it comes from creating environments where their ideas can connect.” – Steven Johnson

“Do something wonderful, people may imitate it.” – Albert Schweitzer

“A person with a new idea is a crank until the idea succeeds.” – Mark Twain

“Innovation accelerates and compounds. Each point in front of you is bigger than anything that ever happened.” – Marc Andreessen 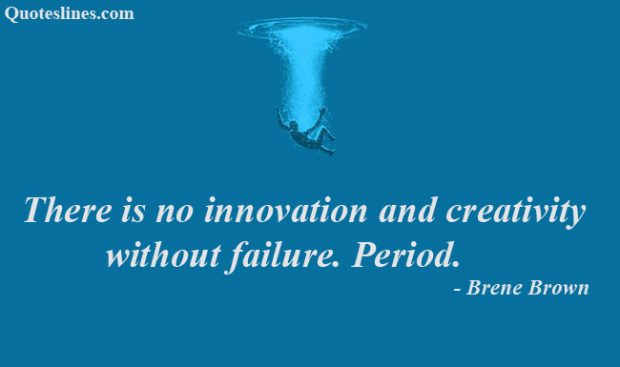 “An essential aspect of creativity is not being afraid to fail.” – Edwin Land

“An idea that is not dangerous is unworthy of being called an idea at all.” – Oscar Wilde

“Creativity is… seeing something that doesn’t exist already. You need to find out how you can bring it into being and that way be a playmate with God.” – Michele Shea

Quotes on Art and Creativity

“The painter has the Universe in his mind and hands.” – Leonardo da Vinci

“To draw, you must close your eyes and sing.” – Pablo Picasso 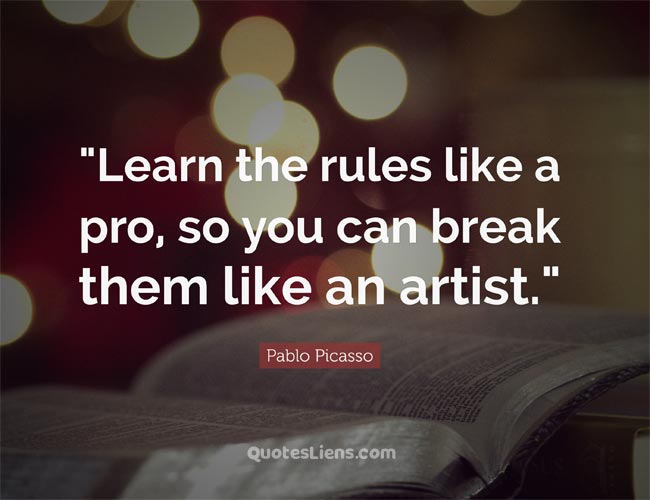 “Every child is an artist, the problem is staying an artist when you grow up.” – Pablo Picasso

“Art doesn’t have to be pretty. It has to be meaningful.” – Duane Hanson 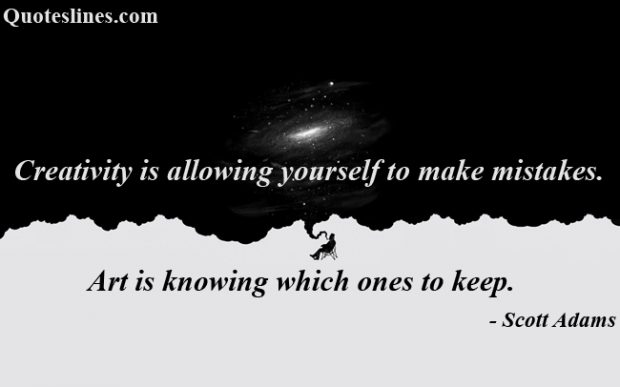 “Art is when you hear a knocking from your soul — and you answer.” – Terri Guillemets

“To practice any art, no matter how well or badly, is a way to make your soul grow. So do it.” – Kurt Vonnegut

“I shall become a master in this art only after a great deal of practice.” – Erich Fromm 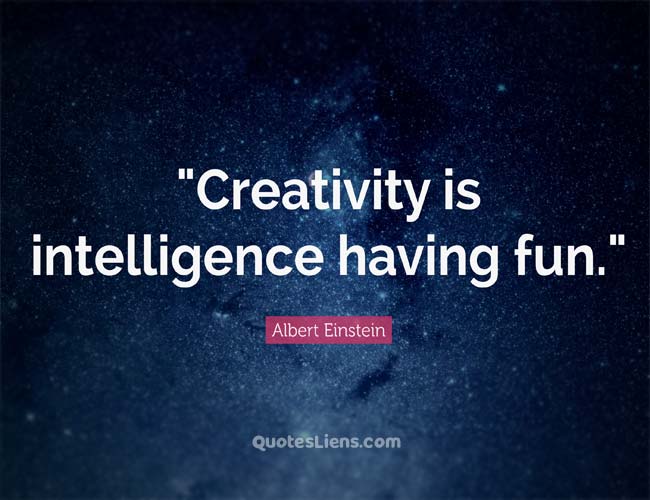 “Creativity is allowing yourself to make mistakes. Art is knowing which ones to keep.” – Scott Adams

“Learning and innovation go hand in hand. The arrogance of success is to think that what you did yesterday will be sufficient for tomorrow.” – William Pollard

“A piece of art is never a finished work. It answers a question which has been asked, and asks a new question.” – Robert Engman

Creativity knows no bounds. Everything in this world is a product of creativity, from literature to artworks to music to architecture, even mere daily useable objects, such as toothpaste or car, or cereals, are products of creativity. It is because someone somewhere envisioned the usefulness of such things in life through their creativity and imagination that we now have access to such things and it is all proven to make our day-to-day life easier and better. Every individual’s creative thought process is what keeps the world moving ahead. Imagination and Creativity make new inventions and innovations which give the universe new meaning. It is very vital to give importance to one and others’ creativity. The more creativity of people gets encouraged, the more the world will move forward in a better direction.

In this article, we have compiled together various quotes on creativity that will make you realize the essentialism of creativity, imagination, inventions, and innovations. The quotes will make you understand how these subjects make our life better and easier. You can read through the quotes and choose your favorite out of them; you can also send them to your family and friends and inspire them about creativity.